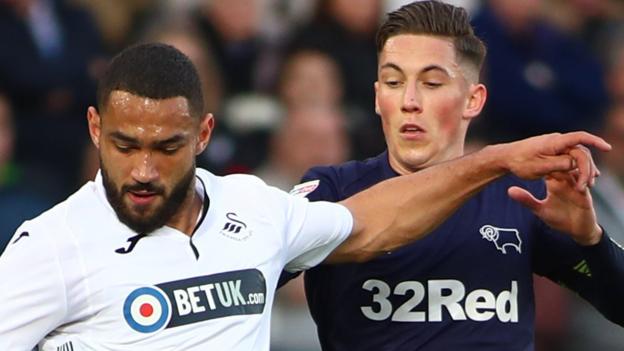 Derby County missed the chance to all-but secure their place in the Championship play-offs as they were held by a resurgent Swansea City.

Richard Keogh headed in powerfully from a corner to put the visitors in front during a controlled first-half display.

The Swans upped their game significantly in the second and Wayne Routledge levelled from a rebound.

Although victory would have effectively sealed Derby’s play-off spot, their fate remains in their own hands.

Frank Lampard’s men host West Brom on the final day of the season, knowing victory – or a result which matches that of seventh-placed Middlesbrough or Bristol City in eighth – would formally guarantee them their play-off place.

Swansea, meanwhile, will have little to play for even though this point lifts them up to ninth in the Championship table.

Although their faint hopes of a top-six finish had evaporated with last Saturday’s draw with Hull, the Swans had motivation to impress in their final home match of the season as they bid farewell to a club legend.

Alan Curtis is retiring at the end of this campaign after some 40 years at Swansea, filling all kinds of roles from player to coach to interim manager – and even a club shop assistant at the Swans’ old Vetch Field home.

Both sides lined up in a guard of honour for the 65-year-old former Wales international before kick-off, and the hosts played at the pace of a testimonial match once the game got under way.

Graham Potter’s young side looked jaded as they allowed their opponents to boss possession, and Derby accepted that invitation as they seized the initiative.

Having threatened with a handful of half-chances, Lampard’s men took the lead when Keogh rose above Mike van der Hoorn at the back post and sent a firm header back across goal and into the top corner.

Derby could have extended their advantage before the break, with Mason Mount and Harry Wilson dangerous; a cross from the latter tipped over the bar by Kristoffer Nordfeldt.

Swansea seemed every bit the archetypal team with nothing to play for but, after the half-time interval in which Potter made two changes, they were transformed.

One of the substitutes, Declan John, had an excellent chance to equalise five minutes into the second period but, after he was well found by a speeding Daniel James, John’s low effort was saved by the legs of Kelle Roos.

The other replacement, Jay Fulton, was the next to threaten as he fired a shot narrowly over. Derby were starting to wobble.

Swansea eventually got their reward when Oli McBurnie had a header pushed on to the post by Roos and, after the ball dribbled across goal, Routledge was on hand to slide in from close range.

Derby briefly threatened to regain the lead as Tom Lawrence’s well-struck effort from 25 yards whistled narrowly over, but a point was the least Swansea deserved for their second-half revival.