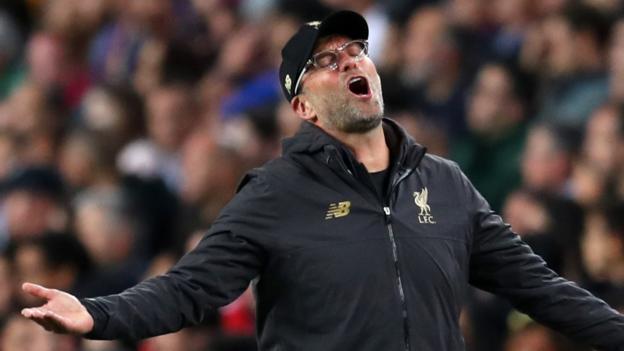 Liverpool manager Jurgen Klopp says his side produced their best Champions League away performance for two seasons in Barcelona – despite losing 3-0.

Luis Suarez gave Barca a first-half lead in the semi-final first leg, but the Reds were on top after the break.

However, Lionel Messi struck twice late on – including a stunning free-kick – to give his side a clear advantage to take to Anfield on Tuesday.

“I don’t know if we can play much better,” said Klopp.

“I think it was the best away game in the Champions League – not only this year, last year included.

“I told the boys I’m proud of how we played. Against a side like this, playing this kind of football, I was completely happy.

“In the end, nobody is really interested – probably only football nerds will think about it – because it was about the result, and we lost 3-0.

“I can work really well with this game. I will use this game to show the boys what is possible. It was a brave performance that was very passionate, very lively and, in a lot of moments, creative and direct.”

In the second half at the Nou Camp on Wednesday, Liverpool – who were beaten by Real Madrid in last season’s final – had more possession than Barca (57.4%), made more passes (284 compared to 217) and had more shots on target (four compared to three).

James Milner was twice denied by Marc-Andre ter Stegen with the score at 1-0 – but then Messi converted after Suarez had hit the crossbar, before firing in an unstoppable 25-yard free-kick.

Even after that, Reds forward Roberto Firmino saw his shot cleared off the line – and then Mohamed Salah struck the follow-up against the post with the goal seemingly at his mercy.

Over the 90 minutes, Liverpool had 52.4% possession and played 547 passes to Barcelona’s 510, though they did have one fewer shot on target.

“How we caused them problems was outstanding and we controlled the game in the second half,” added Klopp.

“Football is like this. It’s about scoring goals – and they scored three and we scored none.

“Our performance was really good, the boys played a super game. But against Barcelona just a few opportunities can be enough [for them to win].”

Despite his side not managing an away goal to give them extra hope, Klopp said he is still optimistic for the second leg “because it’s football”.

“Before this game we had a bigger chance – it is difficult,” added the German.

“It is Barcelona and if they can play for counter-attacks, that doesn’t help us a lot. It is difficult to avoid – but because it is football we should still try.”