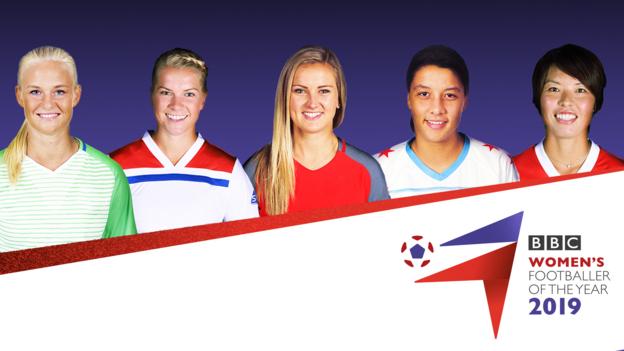 The shortlist for the BBC Women’s Footballer of the Year 2019 has been revealed – and you can now vote for your winner.

The five contenders for the BBC World Service accolade were chosen by a panel of experts, including coaches, players, administrators and journalists.

Voting closes on Thursday, 2 May at 09:00 BST (08:00 GMT) and the winner of the award will be announced on Wednesday, 22 May on BBC World Service and the BBC Sport website.

Here’s more on the five contenders vying for the honour, which is in its fifth year.

Harder finished the 2017-18 season as the top scorer in the women’s Bundesliga with 17 goals, and helped Wolfsburg to a consecutive domestic double.

She also played and scored in her first Champions League final last year against Olympique Lyonnais, but came away without the trophy after a 4-1 defeat.

However, Harder claimed individual silverware after being voted the Uefa Player of the Year 2018. She was also runner-up at the women’s Ballon d’Or.

Hegerberg won her third consecutive Champions League title with Olympique Lyonnais last year and finished with a record 15 goals in the competition as her team completed the French league and European double.

Hegerberg has scored 193 times for the club since joining in 2014, with 19 coming in 18 league matches this season. She signed a new long-term deal last summer.

The Norwegian, who no longer plays for Norway, was the first recipient of the Women’s Ballon d’Or in 2018.

She became the first Portland Thorns player to be given the accolade after scoring 13 goals and making two assists in 22 matches during the regular season.

Horan helped her club to the NWSL Championship final by finishing second in the table, but the lost to North Carolina Courage.

Currently playing for both Perth Glory and Chicago Red Stars, Kerr is the all-time top scorer in the NWSL, and in January 2019 earned the same record in the W League in Australia.

She won her second consecutive NWSL golden boot in 2018, finishing with 16 goals and four assists in 19 games for Red Stars.

Kerr was made captain of Australia in February and led them to their first Cup of Nations.

A World Cup winner with Japan, Kumagai captained the national team to the Asian Cup in 2018 – their first win in the competition in four years.

She was part of Olympique Lyonnais’ double-winning squad for 2017-18 season, and has three Champions League titles to her name.

Kumagai has played her part in the French club’s outstanding defensive record in the league campaign; the team have conceded six goals in 20 matches.