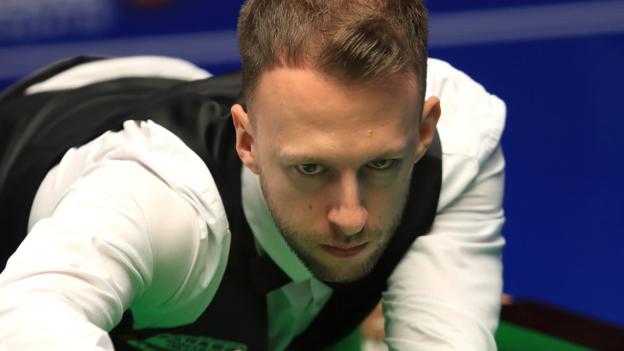 Judd Trump maintained his six-frame lead over Stephen Maguire at 11-5, heading into the final session of their World Championship quarter-final.

Englishman Trump was in scintillating form in the opening session, stroking in three centuries to go 7-1 ahead.

Scot Maguire fought back in the next by claiming four frames including a 110 break, but Trump remains in control.

Qualifier Gary Wilson and 16th seed David Gilbert both reached the semi-finals for the first time.

Wilson came from behind to defeat Ali Carter 13-9, while Gilbert dispatched Kyren Wilson 13-8.

Carter led Gary Wilson 3-0, but hit back by taking five in a row and maintained his two-frame advantage at 9-7 after the second session.

The next four frames were shared, but Wilson coolly took the two he needed to secure victory.

Gilbert was 10-6 in front and although Kyren Wilson threatened a comeback, he was not to be denied.

The pair were level at 4-4 after a scrappy first session – and in the second, one frame lasted almost an hour – but Scotland’s Higgins edged ahead going into the conclusion, to be played out from 19:00 BST on Wednesday.

Gary Wilson, 33, and 37-year-old Gilbert’s progression to the latter stages of snooker’s biggest tournament is a remarkable story. Neither player has ever won a ranking title and are into the semi-finals in Sheffield for the first time.

Tyneside’s Wilson, the world number 32, has had a tough run to the last four, emerging through three qualifying matches before reaching the TV stages and beating three-time champion Mark Selby in the second round.

He quit his job as a taxi driver after turning professional again in 2013, having tried for seven years to regain his tour card.

He said: “There are certain times in that period where I did not even think I would be a professional again. It was ridiculous, I was at such a low point I was desperate to get back on the tour and make a snooker my career. From that point to now is amazing, I am proud of myself.

“I remember being off the tour and struggling for money, thinking what job do I get next. I had been playing snooker since the age of eight, I put my heart and soul into it every day, missed school and nights out with my mates, where was my life going? I am so happy to be making a living out of it now.”

Beaten opponent Carter added: “Gary has to be the favourite to win it now, the way he has been playing. It was the performance of his life, an amazing performance. You have to take your hat off to him, I did not think he could play that good.”

Tamworth’s Gilbert appeared at the World Championship as the last automatic qualifier and has been beaten in the World Open and German Masters ranking event finals this season.

As recently as 2014, he had been working with his dad on a farm, driving a tractor, planting trees and picking potatoes, but a run to the last-four guarantees him £100,000 in prize money, his “biggest ever cheque”.

Asked by BBC Sport if he was picturing winning moments at The Crucible when working on the farm, Gilbert replied: “No, not when I was spending all those hours on the tractor. I am grateful for it but I absolutely did not think I would be a top-16 player in the semi-finals of the World Championship.

“Who would have thought I would end up on the one-table set-up? Certainly not me.

“These opportunity don’t come round too often for someone like me, I have to make the most of it.

Opponent Wilson said: “I think Dave has to improve to win it. If he can find his timing and technique then why not?”