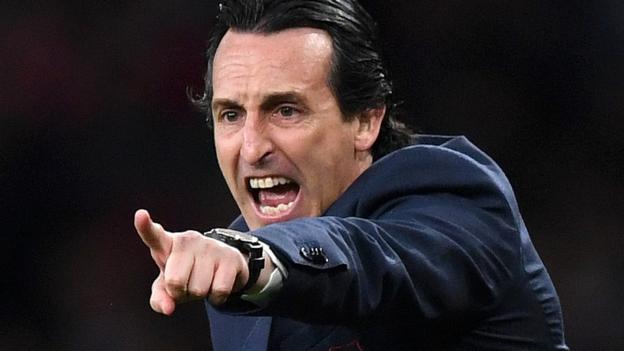 A late goal from Pierre-Emerick Aubameyang extended Arsenal’s lead to 3-1 in the first leg of their semi-final tie with Valencia.

Alexandre Lacazette had scored twice in the first half after Valencia took an early lead through Mouctar Diakhaby.

He added: “I am very proud of our work. We know how tough Valencia will be in front of their fans next week.”

Valencia boss Marcelino said Aubameyang’s late goal came as a “surprise” and makes their task of qualifying “more difficult” but he still thinks they have a chance of reaching the final in Baku.

“We can beat Arsenal in the second leg,” he said. “The game is played until the 90th minute and that’s when they scored their third goal.

“The goal they scored at the end was a surprise and it makes it a more difficult situation for us but it doesn’t take away from our thoughts that we can reach the final.”