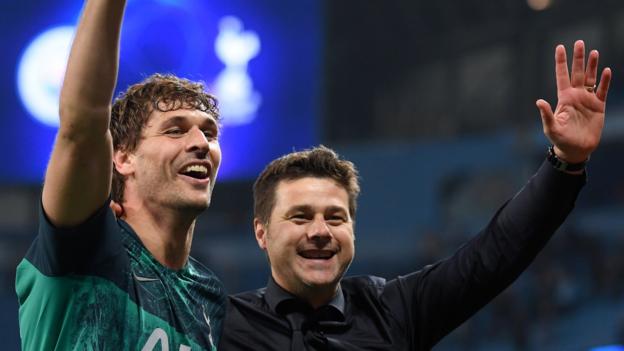 Restoring Tottenham’s pride, challenging for titles and a late-night visit from Marcelo Bielsa to “check his legs” – Spurs manager Mauricio Pochettino talked about it all as he sat down with Gary Lineker.

In a wide-ranging interview for The Premier League Show, which you can watch here, the Argentine discussed how he turned Spurs into Champions League contenders and the club’s aims now they have moved into their £1bn stadium.

Here we pick out the best bits as the Argentine discusses whether Spurs need “better furniture” in their new home by rebuilding the Spurs squad.

‘We need trophies, but I can wait’

This season Tottenham have reached the last four of the Champions League for the first time, despite not buying a new player in the last two transfer windows and having Wembley as their temporary home for most of the campaign.

Lineker asked if the money Spurs have spent on their stadium would continue to affect Pochettino’s transfer budget and, having taken charge in 2014, if he now needs to deliver silverware.

“Personally, for me, no,” Pochettino replied. “I am in football because I love the sport, it’s my passion, but I want to win. We need trophies and we need to fight for big things, to have the opportunity to win the Champions League and Premier League.”

Spurs are still waiting for their first trophy since the League Cup in 2007-08 and with the likes of Harry Kane, Christian Eriksen and Dele Alli frequently being linked with moves away, Lineker asked Pochettino if it is hard to keep his players happy.

“Normally the players are never happy – you know, we never were happy,” he said. “But the most important thing is that we are a family, we have this spirit. I feel so proud. They know me very well, they know that they can trust.

“That is why I said our players are heroes. Because they understand the circumstances of the club,” he added.

“The reality is that it’s difficult to compete with another club that are only focusing on improving the squad. Maybe I can wait [for a trophy] because, in my career, I am still young, but for the players it’s different.”

‘Now we must focus on winning titles’

Although Pochettino is yet to win a trophy as a manager, in 2016-17 he helped Spurs finish above Arsenal for the first time since 1995, and the club now has a new training ground as well as a new stadium.

“When we arrived here one of our challenges was to reduce the gap with the top four,” he told Lineker. “The circumstances were completely different. The confidence and the trust in the club was a little bit down.

“It was about recovering that pride and saying ‘we are Tottenham’. We hear always about Tottenham having a massive history, with a lot of massive players – like you – but it never was a club that really believed they could win, that they could be in the semi-finals or final of the Champions League.

“To win the Champions League or Premier League we must be focused in all areas of the club on winning,” Pochettino added. “In the last five years a lot of things have happened at this club. We finished the training ground and built a new stadium, but now we must be focused, all together, on winning titles.

“I think it’s in our nature that we are brave, we’re not scared about the new things. It would have been easy to say ‘let’s stay at Wembley’ or keep [playing] at White Hart Lane. But if you want to grow and be one of the best clubs in the world then you must take a risk, and I think the club is doing that.”

Being scouted by Bielsa

Despite winning 20 caps for Argentina and playing for Paris St-Germain, Pochettino admits his playing career was best remembered for the penalty he gave away against England at the 2002 World Cup.

It all began back in Argentina after being scouted for Newell’s Old Boys by highly respected manager Marcelo Bielsa, who could join Pochettino in the Premier League next season having led Leeds to the Championship play-offs.

“It’s an unbelievable thing that happened,” he explained. “When I was 13, Marcelo Bielsa knocked on my door at one or two o’clock in the morning. Of course my Mum and Dad were a bit scared.

“Marcelo asked if he could see the boy and they said ‘of course’. My Mum pulled out the blanket and Marcelo said ‘what legs! They’re the legs of a footballer’.”

Having played as a centre-half, Pochettino felt he was destined to become a manager and after spells as Espanyol and Southampton boss, he is set to lead Spurs into a new era.

“Football is going to be the most important thing at the club,” he said. “I understood that, if we wanted to play in the Champions League and be one of the best clubs in the world, we needed to move and build a new stadium.

“Now the key is from now to the future, and how we are going to have the opportunity to build a new project and be sure we’re a real contender and consistent in the future.

“When people talk about Tottenham they say ‘you have an amazing house but you need to put the furniture in. Maybe you need better furniture’. It depends on your budget but that is the reality.

“We have to be respectful about teams like [Manchester] City or Liverpool, that are paying a lot of money, but I think we are brave, we are clever and we are creative.

“Now it’s about creating another chapter and having a clear idea about how we are going to build that new project for Tottenham.”