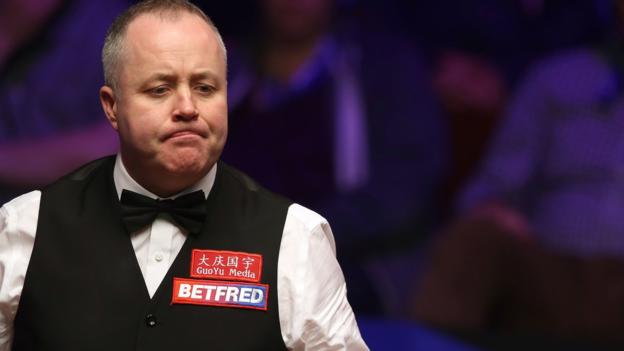 Gilbert made a nervous start by missing straightforward pots, allowing Higgins to take the first two frames, but soon settled with a break of 94.

Judd Trump and Gary Wilson’s semi-final gets under way at 19:00 BST.

World number seven Trump is the clear favourite to win this year’s tournament for the first time.

Englishman Gilbert is into the last four for the first time, having ousted three-time champion Mark Selby on the way, while Scot Higgins is appearing at this stage for the 10th time.

After an edgy start, he showed his composure and came close to making the first maximum at The Crucible since 2012 having potted the 15th red with a brilliant double, but missed the next black after leaving himself in an awkward position.

Gilbert is a great player and his friends and family will know how much hard work he has put into this. The people who practise with him in his club and his fellow professional will know how good he really is.

But the pundits are the harshest critics, we judge by the highest possible standards which is when they get here and he has impressed us today. You cannot do better than playing at The Crucible.

Make no mistake about the differing levels of expectations two players come into this semi-final – Higgins is expected to beat Gilbert and it is never nice when the pressure is heaped onto you. At times it is harder to play from that situation.

Gilbert has shown tremendous bottle, especially potting a difficult red down the cushion in the final frame.

You cannot win the World Championship by playing well in every session and by Higgins’ standards, that is a mediocre showing, that is not what we are used to seeing from him. There is a long way to go and we cannot discount him.