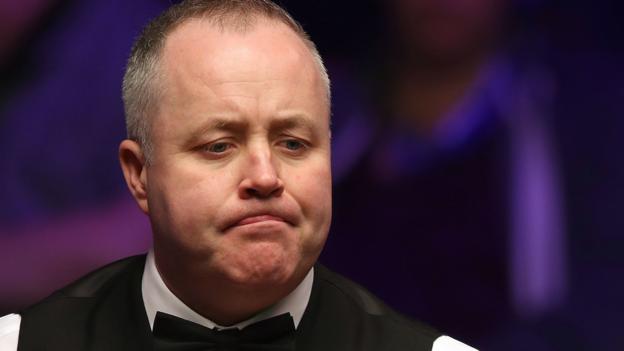 David Gilbert extended his lead over four-time champion John Higgins to 10-6 after the second session of their World Championship semi-final.

Higgins was all over the place in parts of the second session but managed to rediscover his form sufficiently to win three frames.

The second session of their semi-final resumes at 14:30 BST live on BBC TV and online.

Higgins made uncharacteristic errors in the first four frames of the second session, missing the simplest of pots and producing loose positional play.

Six-time world champion Steve Davis said on BBC Two: “It is mad, I have never seen anything quite like this. He is making unforced errors, bad decisions on tactical shots. It is ridiculous.

“He has lost his form nearly to the level that he is embarrassed by some of the shots he is playing.”

Fellow BBC Sport pundit John Virgo added: “John is not with it and is just gift-wrapping opportunities for his opponent.”

Although Higgins improved after the mid-session interval, managing breaks of 67 and 58, his poor performance was epitomised in the 16th frame, missing a blue down the cushion to allow Gilbert to clear and open up a four-frame advantage.

Find out how to get into snooker, pool and billiards with our fully inclusive guide.