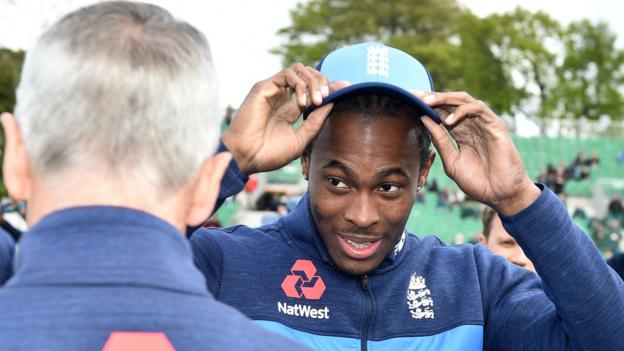 Jofra Archer’s bowling figures on international debut were hardly headline-busting – 8-0-40-1 – but scratch beneath the surface and it is easy to see why England will be pleased with what they saw of the Sussex speedster in their four-wicket win over Ireland on Friday.

Here, BBC Sport assesses the impact of Barbados-born Archer on his long-awaited debut, just a couple of months after he became eligible to play for Eoin Morgan’s men, and a matter of weeks before England finalise their 15-man World Cup squad on 22 May.

Act one: The new ball

After a winter spent playing under the bright floodlights of the Big Bash and IPL, Archer was thrust into international cricket on a cold, damp day in Malahide.

He opened the bowling with David Willey and watched as his opening delivery was smeared through the covers for four by Ireland’s no-nonsense opener Paul Stirling.

Bowling at speeds of around 84mph initially, it wasn’t until midway through his fourth over that he breached the magical 90mph barrier.

Still, Ireland were off to a flyer – passing fifty without loss – and Archer was withdrawn from the attack.

Archer, as observers of franchise cricket will know, is also something of a ‘gun’ fielder.

And while he couldn’t break through initially with the ball, he did manage to prise apart Ireland’s openers in the field.

Diving forward at mid-on, he held on to Paul Stirling’s mis-timed shot to give Tom Curran the first of three wickets.

If – and it’s still an if – Archer is to break into England’s World Cup team, he may have to bowl in the middle overs, as David Willey and Chris Woakes share the new ball.

With an older ball and batsmen more likely to be set, an ability to take wickets is key – and Archer, like Liam Plunkett (4-35), was able to show that side of his game in Malahide.

Regularly bowling at speeds of 90mph in his second spell, and unsettling the batsmen with slippery bouncers which were difficult to pick from his languid approach to the crease, he ended debutant Mark Adair’s entertaining knock.

Adair, on debut, had become an irritant to England as he blazed his way to 32 off 29 balls with two fours and two sixes.

He was no match for Archer, however, as the England quick delivered a 90mph yorker that sent the Irishman’s off stump cartwheeling.

“That is exactly why Jofra Archer has been brought into the squad,” purred former England batsman Ian Bell on Test Match Special.

“He’s showing us he can get wickets in the middle overs. That is a perfect yorker.”

He bowled with pace, variety and skill (offering the odd glimpse of his much-vaunted slower ball).

“He bowled at 90mph with ease on a very cold day.

“Whether he plays in the World Cup or not, you can see he’s a fine, rhythmical bowler. He makes it look so easy – and it’s not.”

If you’re in any doubt about how uncomfortable it is to face Archer, take note of this tale from former England fast bowler Steven Finn – as told to BBC Radio 5 Live’s Sports Friday Sports Panel.

“I’ve played against him and my finger’s still sore from where he hit me on it last year,” said Finn. “I bowled a bouncer at him when I was bowling in the first innings of the game and I hit him on the head.

“And then when I came out to bat it was bouncer – it smashed me on the finger and it hurt a lot and is still sore nine months later.”

Bigger tests await in the five-match one-day series against Pakistan, which follows Sunday’s single T20 international against the same opponents, and then the World Cup.

But, for now, England fans can continue to dream about the X-Factor Archer may bring to their bowling attack in a World Cup on home soil.