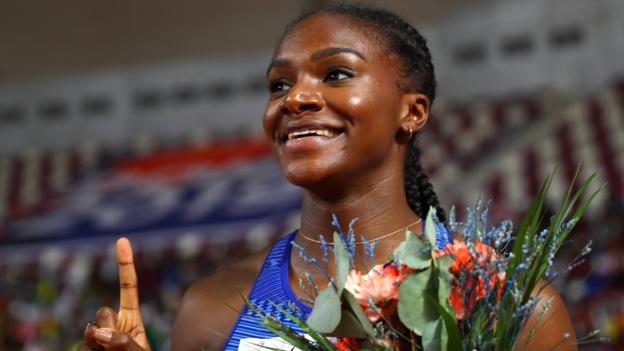 Britain’s Dina Asher-Smith began her season with an impressive Diamond League win in the women’s 200m.

The European sprint-double champion, 23, stormed to victory in Doha, in a world-leading time of 22.26 seconds.

“That’s a cracking start to the year,” said BBC Sport’s athletics commentator Steve Cram. “There was a slight following wind but it was legal.

“There’s bound to be more to come from her so watch out everyone – she’s going to be a major contender this year.”

In the first Diamond League meeting of 2019, the Netherlands’ Jamile Samuel was second in 22.90 with Nigeria’s Blessing Okagbare third (23.14).

Turkey’s European champion Ramil Guliyev won that event in 19.99, ahead of Ecuador’s Alex Quinonez and Canada’s Aaron Brown, while Ireland’s Leon Reid was seventh in 20.93.

Shannon Hylton, 22, was disqualified in the women’s 200m after a false start in her first Diamond League meeting.