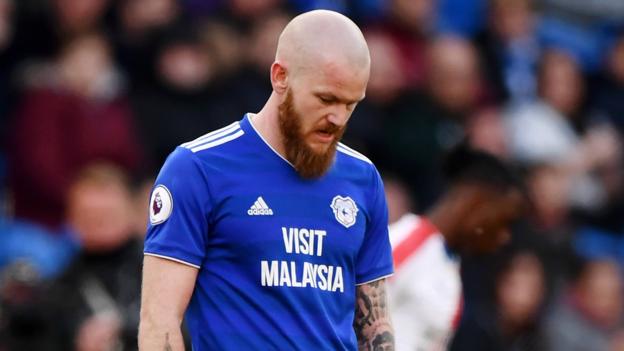 Cardiff City will make an instant return to the Championship after their Premier League relegation was confirmed with a home defeat against an impressive Crystal Palace.

Needing to win this game to keep intact their faint hopes of staying up, Cardiff hit the post inside the first minute through Josh Murphy but then fell behind when their former loanee Wilfried Zaha fired into the bottom corner from the edge of the area.

The Bluebirds equalised less than two minutes later as Martin Kelly turned a Leandro Bacuna cross into his own net, only for Palace to regain the lead as Michy Batshuayi applied an emphatic finish to a fluent passing move.

Cardiff rallied with a handful of second-half chances but Andros Townsend crushed any lingering hopes the hosts had of avoiding relegation when he cut inside from the right wing and struck with a low effort that went in off the post.

Bobby Reid scored in the 90th minute to reduce the Bluebirds’ deficit but they were ultimately well beaten by a confident Palace side, who climbed up to 12th in the Premier League table.

In a quirky twist of fate, the Eagles’ victory also secured top-flight survival for their bitter rivals Brighton.

Cardiff, meanwhile, are left to reflect on their second successive Premier League stint the that has ended after a single season.

Cardiff down but not disheartened

Even before kick-off, there was an air of resignation at the Cardiff City Stadium, where the home fans seemed to have reluctantly accepted their team’s likely fate.

With Cardiff needing to beat Palace and then win at Manchester United on the final weekend – while also hoping Brighton lost to Arsenal and Manchester City – the prospect of survival was remote.

The mood was not as gloomy as it might have been, though. The common refrain among most Cardiff supporters was that they couldn’t have asked for more effort from their side, who were written off at the start of the season and at least still had some sort of chance – however slim – of clawing their way to safety.

Having any kind of hope gave the players and fans reason to believe, and that was evident when Murphy’s deflected 25-yard strike hit the post to prompt a huge roar of encouragement from the crowd.

Reality kicked in, however, when Zaha’s low effort nestled in Cardiff’s net; the home fans silenced as the severity of their side’s predicament dawned on them.

Neither the players nor fans meekly accepted their fate, though, and Kelly’s own goal briefly renewed their hopes of a miraculous escape.

But although Warnock’s men grafted as they always have done, they were simply not up to the standard of their slick opponents.

Cardiff looked heavy-legged and perplexed as Palace’s attackers out-thought and outplayed them, and it was a small wonder that the hosts were not further than 2-1 behind at half-time.

That has been the story of their season: wholehearted in their commitment and endeavour but limited in terms of their ability, and vulnerable against genuine quality.

Down but not disheartened, the vast majority of home fans stayed behind after the final whistle to pay tribute to their players and veteran manager, who they serenaded with loud cries of “There’s only one Neil Warnock”.

Palace impress on the road again

Comfortable in mid table and with little to play for, Palace may have seemed like ideal opposition for a Cardiff side fighting for survival – but Roy Hodgson’s side had a formidable away record to maintain.

The Eagles had already collected 16 points on the road in 2019 – a total only bettered by Manchester City – and their counter-attacking here demonstrated why they have been such a force away from Selhurst Park.

Zaha and Townsend were both in irresistible form on the left and right wings, stretching Cardiff’s defenders with their pace and movement, switching positions with Jordan Ayew and Batshuayi to devastating effect.

The first goal was an illustration of Zaha’s individual trickery – with a subtle drop of the shoulder to deceive Aron Gunnarsson before firing in – while the second was a triumph of team play.

Zaha found Luka Milivojevic, who passed to Ayew, who then threaded the ball through Bruno Ecuele Manga’s legs to Batshuayi, who blasted the ball into the top corner.

Although Cardiff recovered and threatened to level for a second time, Palace reasserted their control with a fine third goal as Townsend sped down the right flank, cut inside and scored with a low left-footed strike.

Some Palace fans had joked before this match that they would have liked to see their team lose in order to damage Brighton’s chances of staying up – but the players did not get that memo.

This was an assured performance brimming with attacking promise that bodes well for next season.

‘I have nothing but praise for everybody’ – what they said

Cardiff boss Neil Warnock, speaking to BBC Sport: “They [the fans] knew when I took over the club was in a mess, it’s been reborn – everybody is singing from the same hymn sheet.

“They know we’ve given it our best. We had some great chances in the second half. The Chelsea result killed us, that night in the dressing room. It was really low that night, they have kept fighting so I have no complaints.

“The problems we have had to put up with throughout the season, I have nothing but praise for everybody. It makes such a difference when you hear the crowd.”

Crystal Palace manager Roy Hodgson, speaking to BBC Sport: “We scored three good goals and created some good opportunities aside from that – their goalkeeper made some outstanding blocks.

“It’s never easy coming to a team fighting for their lives once your own safety is secured. We showed some good quality.”

On the difference between away form and home form: “Away from home it’s been different, we’ve taken our chances much better, scored some very good goals and we do find when we play away from home that the game opens up more. Teams have shown respect to us this year and don’t leave many gaps.

“We still believe Selhurst Park is an excellent ground to have as a home ground and I hope next season we get as many home points as we manage to get away.”

Cardiff straight back down again – the stats

Cardiff travel to Manchester United and Crystal Palace host Bournemouth on the final day of the season next Sunday (both 15:00 BST).