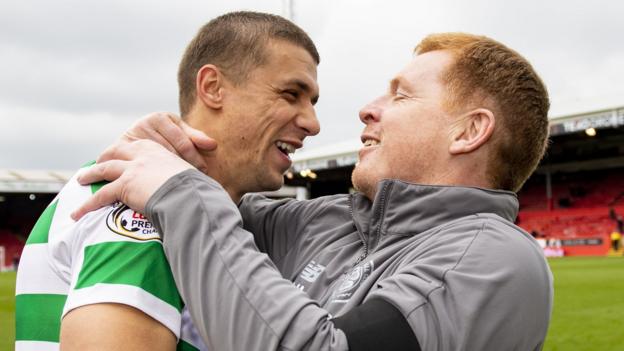 Fifty league titles in their history, eight top-flight crowns in a row.

Saturday’s victory over Aberdeen, enough to clinch the Scottish Premiership for Celtic, was a landmark moment for all at the Glasgow club.

But how does it compare to the seven that were tucked away in the Parkhead trophy cabinet before them on this current golden period?

Have Celtic been at their dazzling best this season or have they been allowed to drop off and walk to another league title? BBC Scotland took a look at the numbers to try and find out.

Taking longer to win the title

Since Lennon took charge in late February, there has been a sense that the Glasgow side have not so much sprinted to the finish line, but rather coasted to the campaign’s conclusion. And when we compare this season’s title race over the entire campaign to the previous seven, there are some suggestions that this may be the case .

Celtic’s 50th league title was won on matchday 36. That is one game more than last season, it is six later than the club’s invincible campaign the year before. In fact, of the eight titles, this is the joint-latest of them all alongside Ronny Deila’s success in 2015/16.

Scoring more than last term, but fewer in general

One area where this season has been better is in terms of the average goals Celtic have scored per Premiership match. The 2.1 of this term is an improvement on last term’s 1.9 but is still the second worst return during the club’s eight-year stranglehold over the Scottish top division.

Part of that is undoubtedly down to the manner in which the goals have dried up over the past two months. For example, ahead of defeating Aberdeen, Celtic had scored just six goals in the seven league games.

Again, Rodgers’ impressive first season at the club sets the gold standard in this regard, when Celtic averaged 2.8 goals per game. Lennon’s own side in 2013/14 came a close second with 2.7 goals, but this campaign has looked rather sub-par by the club’s own high standards.

But much better defensively

One area in which Celtic have looked more impressive this season is in defence. At the point of clinching their league title on Saturday, Celtic were averaging just 0.5 goals conceded per game. Not only is that the most impressive defensive record in the Premiership this season, but it is also the club’s third best average over the last eight campaigns.

It is worth noting that Celtic’s defensive record in the Scottish Premiership has been steadily improving over the last three seasons – to the point where the club are conceding almost half as often as they did in 2015/16.

Overall how does it compare?

So where do we rank this league-winning campaign among the Celtic’s eight in a row? Most fans will point to Rodgers’ first season in charge as the most emphatic and, by most metrics, this campaign’s win struggles to compare.

However, that’s not to say this Celtic team have nothing to celebrate. They might have taken a game more to win the title this term, but they have improved upon their offensive and defensive records.

Similarly, Celtic have had to contend with a resurgent Rangers, serious injuries and absences from key players, and the unexpected departure of one of the club’s most successful managers. And yet they have still managed to win the title with some room to spare.