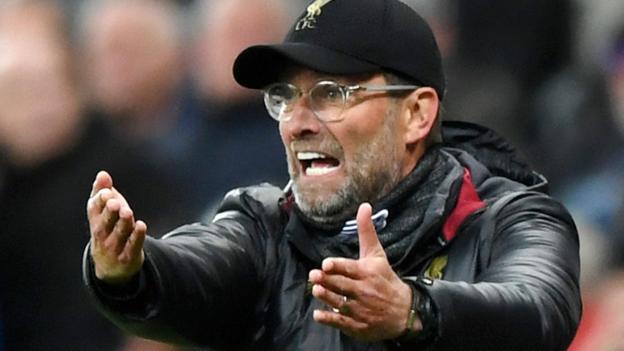 Jurgen Klopp said Liverpool have “qualified for our final” after his side scored a late winner at Newcastle to ensure the Premier League title race goes to the last day of the season.

City face Leicester on Monday in their penultimate league fixture.

“This was a victory of passion, heart and absolute desire,” said Klopp.

Liverpool twice took the lead through Virgil van Dijk and Mohamed Salah – who was taken off an a stretcher – but twice Newcastle fought back as goals from Christian Atsu and Salomon Rondon looked to have handed City the chance to move three points clear at the summit on Monday.

But Origi’s goal four minutes from time – described by Klopp as “nearly a fairytale” as the Belgian was set-up by fellow substitute Shaqiri – saw the Reds put the pressure back on Pep Guardiola’s reigning champions.

Liverpool host Wolves, chasing seventh and potential European football, on the final day, while City travel to Brighton, whose top-flight safety was confirmed with Cardiff’s defeat by Crystal Palace on Saturday.

“Now we are qualified for our final on Sunday against Wolves. Of course, before that we play Barcelona, but I’m not thinking of that yet. Then we will see,” said Klopp.

“I know what kind of boys I have – who doesn’t know after the game today? With the schedule we have, the games we have, and then playing here – obviously, the absolute opposite of a friendly game – playing against a team with the style they have. You have to run, we tried to press, you have to be around the second ball. It’s a big challenge to concentrate 100% always.

“I saw in the face of the boys’ reaction, it was good – nobody went nuts or whatever. If anyone thought Newcastle weren’t playing for anything, wow, that was competition – but we deserved to win.”

Goalscorer Origi added: “You feel the emotion. It’s a very special season for everyone but, as a player, you have to channel that feeling into the performance and in the end it worked out.

“One of our main strengths is being together and working for each other, a mixture of talent and hard work. We showed big heart coming here against a very good team with a very good coach and we knew it was going to be a fight, especially after Barcelona.

“In the end we did it and it was very important for the team.”