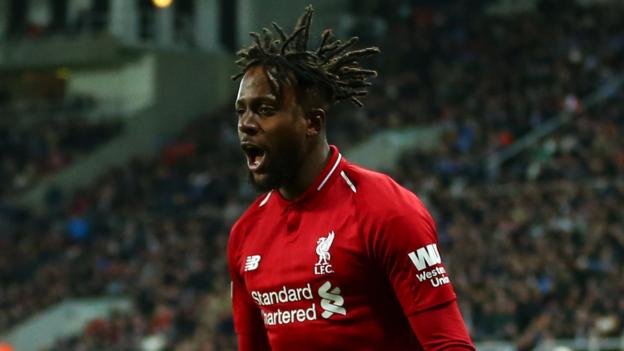 Divock Origi’s late winner sent Liverpool back to the top of the Premier League with victory at Newcastle United to put the pressure back on Manchester City and ensure the title race will go to the final game.

Origi – on as substitute for Mohamed Salah after he was taken off on a stretcher with a head injury sustained in a collision with Newcastle keeper Martin Dubravka – headed in Xherdan Shaqiri’s free-kick in the 86th minute.

It gave Liverpool three points after a topsy-turvy night on Tyneside.

Now Manchester City must beat Leicester City at Etihad Stadium on Monday to ensure they retain the initiative going into the final round of games next Sunday.

Liverpool went ahead after 13 minutes when Virgil van Dijk arrived unmarked on the end of Trent Alexander-Arnold’s free-kick.

Newcastle were quickly level when Christian Atsu scored from close range after Alexander-Arnold handled Salomon Rondon’s shot on the line but Salah took advantage of more poor marking to volley home another fine delivery from the young defender.

Rondon, a handful all night, drew Newcastle level once more nine minutes after the break when Liverpool failed to clear a corner and Jurgen Klopp’s side suffered another blow when Salah was taken off after a lengthy delay.

Origi was introduced and made the decisive contribution that keeps the title race alive – although Salah’s injury is a worry with Liverpool attempting to claw back a 3-0 deficit against Barcelona in the Champions League semi-final second leg at Anfield on Tuesday.

Liverpool refuse to go away

Liverpool simply refuse to buckle in their pursuit of Manchester City – no matter how long they have to wait to get the victories they require.

Klopp’s side are showing remarkable drive and resilience, illustrated by the manner in which they have won so many games in the closing stages, especially when the pressure has been on.

There have been prime examples at home to Everton and Tottenham but in recent weeks they have stayed the course to outlast opponents such as Fulham, Southampton and now Newcastle away from home.

And here, in this unforgiving Tyneside atmosphere, they overcame adversity and a Newcastle side who were in no mood to stand meekly aside despite Premier League safety being assured.

Liverpool were vulnerable in defence but this is a side that carries a persistent threat and it was the introduction of the likes of Shaqiri and Origi that made the difference.

Liverpool could have been forgiven for thinking the fates were against them when Salah took that sickening blow in an accidental aerial collision with Dubravka, the Egyptian lying on the floor for several minutes before being taken away on a stretcher to sympathetic applause from the entire stadium.

And yet they responded once more, digging deep to secure three points with Origi’s glancing header and this means Manchester City know the stakes are huge when they face Brendan Rodgers’ in-form side on Monday.

What next for Newcastle and Benitez?

Rafael Benitez spent the entire night taking the acclaim of the Toon Army, from before kick-off to a post-match lap of honour when the supporters chanted long and loud for the Spaniard to agree a new deal to stay at St James’ Park.

The messages are still mixed but not here among Newcastle’s fanbase. There is only one outcome these fans, who idolise Benitez, want.

Whether Benitez gives them what they desire remains to be seen but once again he has kept a workmanlike squad in the Premier League with room to spare and now wants the investment to send them into the top 10.

Ironically, on this night, some of the Benitez trademarks were missing as wretched defensive organisation allowed Liverpool to cash in on each of their goals.

But, as he led the players around St James’ Park to take the supporters’ applause it was clear that those fans now want the final line of this season’s story to be written with Benitez’s name on a new deal.