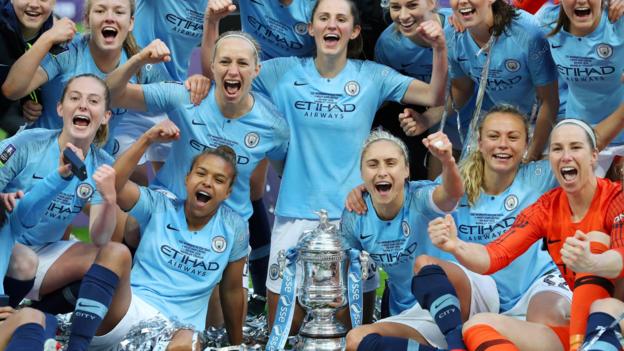 Manchester City completed a domestic cup double as they eventually overpowered West Ham at Wembley to lift the Women’s FA Cup for a second time in three years.

England midfielder Keira Walsh’s bouncing strike from outside the area put City ahead in the second half, after major final debutants West Ham had initially defied their underdog status with an impressive first-half display.

Victory also saw Nick Cushing’s side move within one match of completing an entire domestic season unbeaten, as they added to February’s League Cup success.

The Hammers, who reached the final in their first season as a professional side – less than a year after leaping up from the third division with a successful top-tier licence application last summer – had threatened to pull off a shock win, creating the best chance of the first half.

But City – who had not conceded a goal in the FA Cup this season – showed their class and experience after the break and could have added to their tally in the final moments.

The crowd of 43,264 at England’s national stadium fell just short of last season’s competition record of 45,423, but was nevertheless still one of the largest for a club-level women’s game in Europe in the modern era.

All of City’s six major trophies have come since 2014 under the management of Nick Cushing and they will finish the season without losing a single domestic game if they can avoid defeat away at Women’s Super League winners Arsenal next Saturday.

A game of two halves

England and City goalkeeper Karen Bardsley had produced a superb save to keep out Scotland striker Jane Ross’ bouncing header from Erin Simon’s right-wing cross, in the best moment of the first half, after a cagey start.

The Hammers then wanted a penalty when midfielder Alisha Lehmann went down in the box under Jill Scott’s challenge, but the officials felt the City midfielder had not made contact with Lehmann.

But City – who won the cup for the first time in 2017 – were more energetic after the break and Scotland’s Caroline Weir blazed over from inside the area shortly before Walsh opened the scoring with only her second goal of the season.

The Hammers’ best chance of the second half came on the counter attack, but Switzerland’s Lehmann fired straight at Bardsley, as City began to dominate, and 20-year-old Stanway doubled the lead with a low, deflected strike.

Substitute Hemp – who turned 18 in August – then showed a calmness in front of goal that defied her youthfulness as she supplied a cool finish, and she almost added City’s fourth but she struck the post late on.

Despite the result, West Ham – who beat Reading on penalties in their semi-final – have impressed many during their maiden WSL campaign and appear to be building a growing fanbase, with their fans appearing to significantly outnumber City supporters at Wembley.

The East London club had asked the Premier League to move the kick-off time of their men’s team’s league match at home to Southampton earlier on Saturday, but the plea was denied, much to the Hammers’ disappointment.

On the pitch, they initially surpassed the bookmakers’ pre-match expectations, frustrating City early on, at odds with their 10-2 aggregate loss from this season’s two league meetings, but Ross’ first-half header was the best chance.

Ultimately, City’s clean sheet saw Cushing’s side – lead by talismanic England captain Steph Houghton at the back – finish their five-game cup run without conceding a goal.