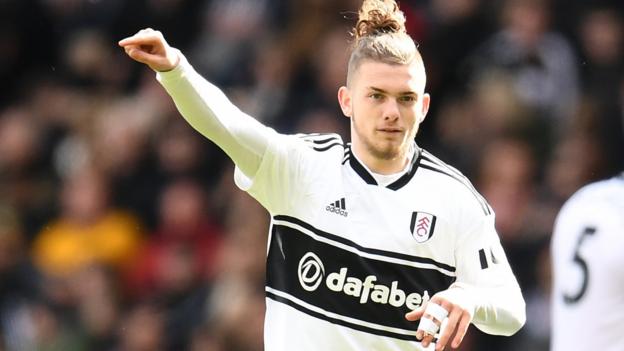 Fulham’s Harvey Elliott has become the youngest ever Premier League player at 16 years and 30 days.

The England under-17 midfielder made his debut in the 88th minute of Saturday’s 1-0 defeat by Wolves.

Former Fulham left-back Matthew Briggs held the previous record, set on 13 May 2007 at 16 years and 68 days.

Elliott, born on 4 April 2003, became Fulham’s youngest player with a substitute appearance in the Carabao Cup third round in September, aged 15.

“Harvey is on the bench and gets on the pitch because he deserves to,” said Fulham’s caretaker boss Scott Parker. “He’s been outstanding in training over the past three weeks. He’s a special talent and we want to nurture him the best we can.”

The youngster, who will be sitting his GCSEs in just a few weeks’ time, was born in a year that saw Black Eyed Peas dominate the charts with Where Is the Love?

The Lord of the Rings: The Return of the King, Finding Nemo and The Matrix Reloaded ruled at the cinema box office.

Number one in the charts on the day Elliott was born was Gareth Gates and The Kumars’ charity song Spirit in the Sky.

Elliott was born 10 months after Ronaldo and Ronaldinho inspired Brazil to World Cup glory and nine months after Manchester United broke the British transfer record with the £30m signing of Rio Ferdinand from Leeds for £30m in July 2002.

Leon Osman, Wayne Rooney and James Milner were among those to make their debuts earlier that season, while Danish goalkeeper Peter Schmeichel, who won the Treble with Manchester United, retired from playing in May 2003.