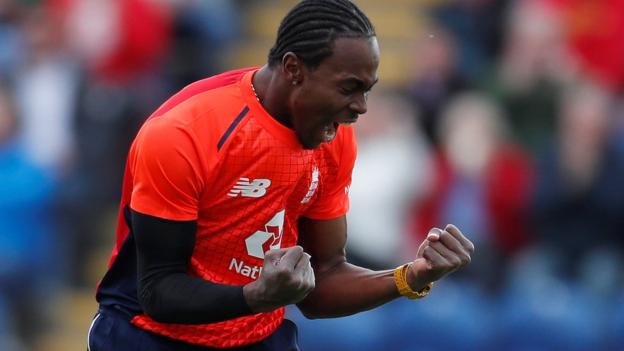 Jofra Archer could give England a “different dynamic” if chosen for the World Cup, according to James Anderson.

Archer took 2-29 on debut in the Twenty20 international win against Pakistan on Sunday.

He is not in England’s preliminary World Cup squad, but can force his way into the 15 during five one-day internationals against Pakistan.

“That extra pace does make a difference. It can put fear into the opposition,” Anderson told BBC Sport.

Archer, 24, was born in Barbados to a British father and qualified to play for England in March.

Already a regular in T20 leagues around the world, he made his one-day international debut against Ireland on Friday and followed that with an impressive display in Cardiff.

“He’s played a lot of T20 cricket around the world, so he’s not new to it,” Anderson, England’s all-time leading Test wicket-taker, said on the Test Match Special podcast.

“He’s not like a young kid who could be raw and taken aback by the occasion. You can see that. He’s fully in control of what he does. He’s confident in his game. He knows what ball to bowl and when.”

Archer returned late in the Pakistan innings to remove both Babar Azam and Haris Sohail, who shared a partnership of 103.

Haris was caught on the leg-side boundary, while Babar was run out as Archer gathered the ball in his follow through, gathered the ball, turned and threw down the non-striker’s stumps with a direct hit.

But it was Archer’s earlier dismissal of Imam-ul-Haq, who gloved an attempted hook shot to wicketkeeper Ben Foakes, that caught the eye of Anderson.

“That is the sort of thing that makes people take note,” said the Lancashire swing bowler.

“When you’re coming up against a bowler who rushes a top-order international batsman like that, it filters through other teams.

“If Jofra does make the 15 for the World Cup, the other teams will watch videos of him to get an idea of what they do and a video like that will fill them with fear.”