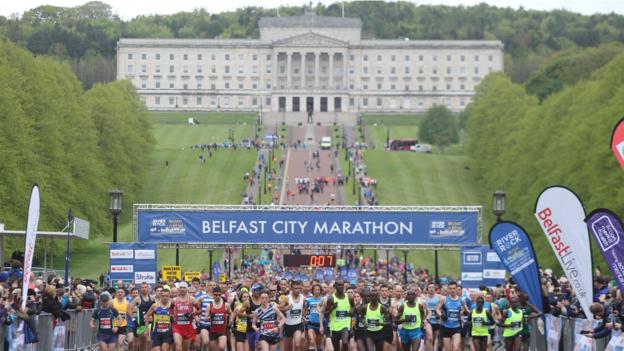 Belfast City Marathon organisers have admitted that Sunday’s course was 0.3 miles longer than it should have been.

Following the race, a number of questions were raised on social media about the new course’s length.

“The route run was 469 metres in excess of the route measured and approved by the Association of International Marathons,” said Mr Glover.

Earlier, Belfast Marathon organising committee chairman David Seaton said there had been “a problem” during the race.

“We’re holding our hands up and we’re addressing it. We wish it hadn’t happened,” Mr Seaton told BBC Sport NI.

“It was a new course and there were lots of things to take in consideration including new legislation which we had to work around.

“This will be an issue for the marathon purists and we understood that but the vast majority of participants have gone away from today’s race – where we had 60% more entries than last year – very happy with their experience.”

Jepchirchir repeated her 2018 win as she set the fastest ever women’s time in Belfast, clocking 2:36:38.

This 38th staging of the event took place on a new course which organisers hoped would ensure faster times.

However, the discrepancy with the course distance is now likely to be the main talking point following the race.

The event’s chairman Seaton admitted that the mistake will upset a number of competitors.

“I can understand if you have been aiming for a sub three-hour marathon time and because of the mistake you have ended up being just outside three hours on the clock, that you are going to be annoyed.

“It’s a hiccup that we obviously could have done without. But I don’t think it should overshadow what was a very successful day with the numbers up significantly because of the new Sunday date.

“People have been coming up to us congratulating us on the day and saying it was a great event with the spectator number also well up on previous years.”