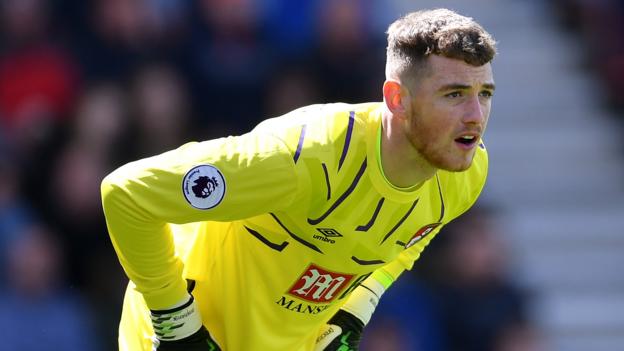 Liverpool beat Newcastle 3-2 to go top of the Premier League – although Manchester City face Leicester on Monday. At the other end of the table, Cardiff were relegated with a 3-2 defeat by Crystal Palace.

Chelsea booked their Champions League place with a 3-0 win over Watford. But Manchester United’s top-four hopes are over after a 1-1 draw at Huddersfield. Arsenal’s are all but finished after drawing 1-1 with Brighton.

Tottenham’s 1-0 defeat at Bournemouth on Saturday does not look as costly as it did at the time. Wolves are close to sealing seventh spot with a 1-0 win over Fulham after Everton had narrowed the gap by beating Burnley 2-0 on Friday.

West Ham beat Southampton 3-0 in a game with little on the line.

Here’s my team of the week – have a read and select your own below.

If you’re a goalkeeper and making your debut, it doesn’t get better than winning a match against a top-four team and keeping a clean sheet.

That’s what Mark Travers did for Bournemouth against Spurs. The 19-year-old showed a lot of courage in a game that contained so many flaws.

However as far as the Cherries are concerned, it looks as if Eddie Howe might have unearthed another gem.

Did you know? Travers (aged 19 years 351 days) became the first teenage goalkeeper to start a Premier League game since Joe Hart for Manchester City in October 2006.

Nathan Ake: If Nathan Ake is not Bournemouth’s player of the season, then I would like to know who is. Admittedly, Steve Cook would probably run Ake a close second but I can’t see how anyone has played better or been more consistent than the Dutchman during the Cherries’ campaign to retain their top-flight status.

Tottenham’s best player against Bournemouth on Saturday was manager Mauricio Pochettino, who managed to remain composed and measured despite some officious refereeing decisions by Craig Pawson.

Spurs have bigger fish to fry against Ajax in the Champions League semi-final in Amsterdam on Wednesday night. Get that right and to hell with the defeat against Bournemouth.

Did you know? Ake has scored two of Bournemouth’s five 90th-minute winning goals in the Premier League, also doing so against Liverpool in December 2016.

Virgil van Dijk: My selection of Virgil van Dijk has little to do with him scoring against Newcastle – besides, his defence conceded two goals.

I selected him because of his desire at 2-2 to win the game. Remember this is a centre-back who, late in the game, is on the edge of the opposition’s box in open play trying to affect the game.

It was also Van Dijk who insisted the free-kick be flighted toward the goal as opposed to away from the keeper, resulting in Divock Origi’s winner.

I must say Liverpool deserve something this season for their sheer doggedness. At times, they have been quite magnificent.

Did you know? No defender has scored more headed goals than Van Dijk in the Premier League this season (three).

Kurt Zouma: If former Everton captain Leon Osman tells me on Final Score that Kurt Zouma has been one of their best players this season, I have to take the comment very seriously.

Against Burnley the defender, on loan from Chelsea, completed another clean sheet and looks as if he could remain at Goodison for the foreseeable future. The question now for Chelsea is: How much?

Did you know? Zouma has completed 84% of his attempted passes in the Premier League this season; that is the highest percentage of any Everton player.

Ryan Fredericks: I mentioned this lad in dispatches last week without selecting him in my team of the week. The former Tottenham trainee seems to be finding his feet at West Ham and making a name for himself at the same time.

Fredericks was outstanding against Southampton. Every time the Hammers launched an attack, he seemed to be entering the frame in a desperate attempt to join it.

The defender sees danger, is quick and has a sharp eye for goal. Makes you wonder why Spurs let him go.

Did you know? Fredericks scored his first Premier League goal – and his first in league competition since January 2014 for Millwall against Ipswich in the Championship.

Ruben Loftus-Cheek: This is a lad I thought was better off staying at Crystal Palace on loan, playing every week and continuing his international development as a consequence of playing regularly. However the player decided to return to Chelsea – or more to the point, the club insisted he returned.

Immediately his game time dropped, he lost all the momentum he gained from his time at Palace and he struggled to be the star his performances suggest he might be.

It’s time Ruben Loftus-Cheek made some serious decisions about his career at Chelsea. The lad can play, as was clearly evident against Watford.

Did you know? Loftus-Cheek has averaged a goal or assist every 112 minutes in the Premier League this term – only Eden Hazard (94) has a better ratio among Chelsea players.

Andros Townsend: From the moment Andros Townsend started his trek towards Cardiff’s goal, turned left at the corner of their 18-yard box and lined himself up for a shot on his left foot, you knew.

On numerous occasions, I have seen the Crystal Palace midfielder pick the ball and run at a defence before unleashing a shot destined for the back of the net.

I’ve seen him do it for England, QPR, Tottenham and Palace – so why Cardiff didn’t see the goal coming and bring him down, well before the player took aim, I don’t know. Another Townsend classic.

Did you know? Townsend has scored five goals in the Premier League this season: his most in a single campaign.

Solly March: The game at Arsenal on Sunday was the best performance I have seen from Brighton in months. I know survival is the name of the game for the Seagulls but some of their games have been dire.

Against Arsenal, who seem to have lost their way under Unai Emery, Solly March was full of running.

The midfielder was always prepared to run in behind the home defence, causing Granit Xhaka acute embarrassment when he forced the Switzerland international to give away a clumsy penalty. There was a time when Champions League was nailed on the Gunners. Not any more.

Did you know? Solly March has completed more dribbles than any other Brighton player in the Premier League in 2018-19 (49).

Wilfried Zaha: From the moment Wilfried Zaha touched the ball, Cardiff’s defenders appeared to be struck by terror. They were petrified of Zaha and left this Ivorian wizard to weave his magic.

By the time the first half was over, Cardiff seemed doomed. Cardiff had chances to win but were simply not equal to Palace.

BBC commentator Steve Wilson put it beautifully when he said Cardiff will be relegated with applause ringing in their ears and they have been.

Week after week, Cardiff had a go and didn’t just park the bus in front of the goal every week. Well done lads and well done Neil Warnock; at least you made life interesting.

Did you know? Only Jamie Vardy (10) and Harry Kane (11) have scored more away Premier League goals this season than Zaha (nine).

Salomon Rondon: The chant said it all from the Newcastle fans – ‘Rafa Benitez, we want you to stay’. I bet Salomon Rondon does too.

Since his arrival at St James’ Park, the Venezuela international has not look back. He has led the Newcastle striking line with distinction.

The problem for the Magpies is that if Rafa goes, so does half of that team. That team is nothing without Rafa’s leadership and inspiration. The quicker owner Mike Ashley can conclude contract talks with Benitez, the better for all concerned.

Did you know? West Brom loanee Rondon has hit double figures for goals in a Premier League season for the first time.

The problem with Arnautovic is his power surges are too infrequent. He’s moody, temperamental and demanding.

But West Ham fans love those characteristics in a player. Paolo di Canio and Carlos Tevez had special abilities but were high maintenance – and so too is Arnautovic.

The problem with Arnautovic is he needs to be playing in a team that can afford such luxuries. West Ham can’t afford power cuts.

Did you know? Since the start of last season, Marko Arnautovic has been directly involved in 30 Premier League goals (20 goals, 10 assists), 14 more than any other West Ham player.

You’ve seen my selections this week. But who would you go for?

The Crooks of the Matter

Full of entertainment, thrills and frolics, the Premier League has gone and saved its best week for last next Sunday. And what a magnificent season it has been.

I said at the start of the season that Jose Mourinho’s relationship with Paul Pogba was on a knife-edge after the Frenchman won the World Cup and so it proved.

Mark Hughes found life a little too challenging at Southampton and had to make way for a manager who could inspire as well as improve his squad without the aid of a cheque book.

Then there was Claude Puel, sacked by Southampton in 2017 after losing the dressing room, proceeding to do precisely the same at Leicester City and with the same outcome.

Brendan Rodgers followed Puel at the King Power Stadium, to everyone’s surprise, having set up the treble at Celtic – only to be labelled Judas, having originally been hailed their messiah.

We go into the final week of the season with the possibility of all-English finals in the Champions League and Europa League – and no-one can predict, at least with any certainty, who will win the Premier League title. What does this tell us? It tells us the game remains at its unpredictable best.