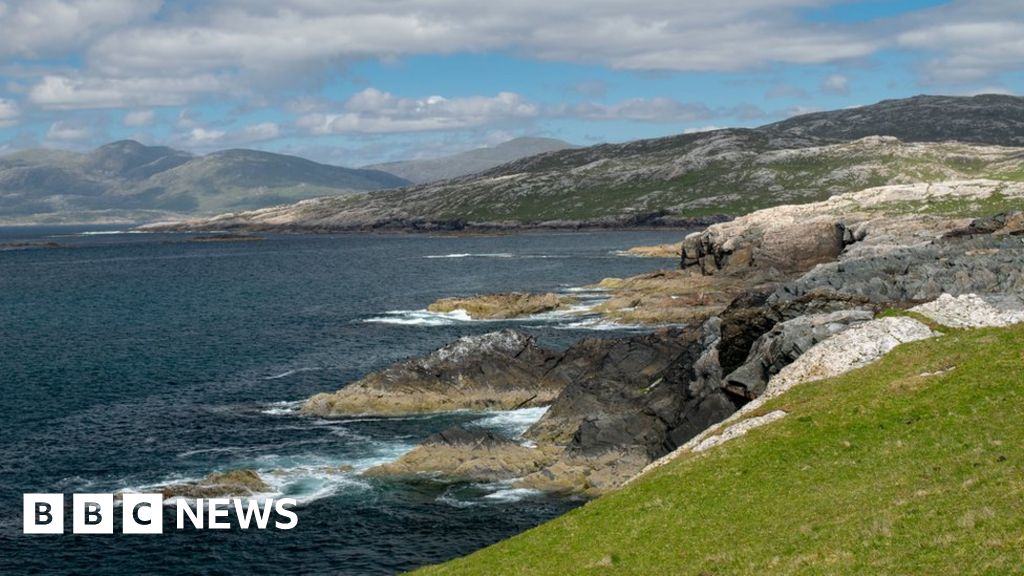 Islandeering shares the same psychology as climbing to the summit of a mountain, according to Lisa Drewe, the woman who invented the term.

She says: “People never really start out with the aim of just going half way up a mountain.”

And for Lisa, the same “completist” urge applies to islands as well.

Islandeering is making a circular journey around the outer edge of an island by any means possible – walking, scrambling or paddling, Lisa says.

So far she has been islandeering on 130 of Britain’s “hidden” islands.

She calls them “hidden” because, by looking for islands she can get to and get around in a day, she has uncovered some amazing places not many people know about.

The routes she takes have a start and finish but in-between Lisa is often following animal tracks and trying to avoid cliffs, the incoming tide or boggy areas.

She says the urge is to see the island from all sides, “just because it is there”.

“I just feel that completing the circle and knowing the island as a whole is important to me, rather than daytripping and going to see something specific,” she says.

“It just seems to be something more of a complete journey rather like getting to the top of a mountain and coming back down again.”

Lisa, who runs a website called Islandeering.com, says she started out searching for “incredible wilderness and nature” but the longer she has been doing the project, the more she has enjoyed chance meetings with people along the way.

“I often meet the postladies or postmen, sometimes they are the only people I see, even on an inhabited island.”

There is also the adventure and the discovery, she says.

“For a lot of the islands there is no information at all about the island, let alone whether you can get around the outside edge.”

She says people have been urging her to share the information on her trips so she has put 50 of them in a new book – Islandeering: Adventures around the edge of Britain’s Hidden Islands.

Some of her favourite Scottish islands

Lisa has a home on Skye, one of Scotland’s most famous islands, which is popular with tourists from around the world.

Millions visit Skye each year but very few have been out to the island of Oronsay, which is linked to it by a causeway.

Lisa says it is possible to cross most of the time but care is needed as it is covered for a few hours either side of high tide.

Once on the island, the free-range route along grassy cliff edges provides plenty of opportunity to explore the “impressive” sea caves and gullies, Lisa says.

And a short, sharp climb gives views “like no other”.

Another small island hiding off the coast of a popular island is Holy Island, off Arran.

Lisa says: “It is an absolutely incredible place.

“It is very highly accessible and it was a complete surprise to me because it is a Buddhist community living among white stupas and prayer flags and according to the five golden rules of Buddhism.

“It is off the coast of Arran, you can look back and see the towering mountains of Arran.

“I don’t think you’d get that perspective from anywhere else. That’s a very quirky island and it’s a very peaceful, tranquil place to go and it’s not that far away.”

Davaar is another island accessed by a 30-minute walk across a tidal sand and pebble causeway.

It lies just off Campbeltown on the Kintyre peninsula, with views to Arran in the north east and the Ayrshire coast to the south.

The island has a permanently occupied lighthouse and a few holiday lets but is otherwise sparsely populated.

One of its more unusual attractions is a sea cave with a painting of the Crucifixion inside.

The painting was discovered in 1887 by a local fisherman and frenzied speculation ensued about how it had got there.

The mystery artist, local art teacher Archibald MacKinnon, kept his secret for 47 years before revealing he was behind it.

Eilean Shona, which nestles in the entrance to Loch Moidart on the west coast of Scotland, is a “magical place”, according to Lisa Drewe.

Peter Pan writer JM Barrie used the island as a summer holiday retreat for himself and his foster sons in the 1920s and it is thought it was here that he wrote a screenplay for the 1924 film adaptation of his famour work.

“You can almost feel some of those mythical characters moving around in the woods,” Lisa says.

Lisa says that, once on the island, you immediately sense that island is being cared for.

The “unspoilt” island has a permanent population of two but there are some restored cottage for visitors.

In the Orkney archipelago, the island of Hoy is popular with tourists but few make it to South Walls, which is joined to it by a causeway built on top of sandbanks.

The island’s small population is concentrated at Longhope, with a scattering of houses in the low-lying north.

The south of the island is wild and remote, Lisa says, with some “incredible geological features”.

“When you look down them you get vertigo and at the bottom you can hear the sea sucking and gurgling below,” she says.

Lisa says: “During high seas they become magnificent blowholes and seeing spray blasted out of their tops is quite a surreal experience when walking towards them on the cliff.”