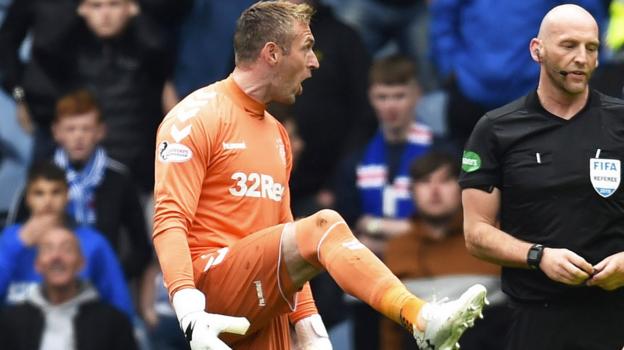 McGregor was dismissed for raking his studs into the back of Marc McNulty in the closing stages.

Rangers, having used all three substitutes, played out the game with midfielder Ross McCrorie in goal.

The result was the Ibrox side’s fifth straight win.

Fifth-place Hibs needed victory to keep their European hopes alive, but offered little until a late chance for Florian Kamberi forced a fine save from McGregor.

Heckingbottom’s 10-game unbeaten run as Hibs boss ended with a whimper as his side paid for a woeful first-half performance.

Second-top Rangers are nine points behind Celtic, who clinched their eighth straight title on Saturday, with two games left.

All three previous meetings this season had ended in stalemates and Hibs were bidding to go unbeaten in a campaign against Rangers for the first time since 1974-75.

They were pinned back from the outset, though, with Defoe and James Tavernier causing havoc. With just a minute on the clock, Scott Arfield rose unchallenged to glance a header narrowly wide from Tavernier’s free-kick.

Connor Goldson then nodded another Tavernier dead ball just too high and Ryan Kent and Ryan Jack both had first-half shots saved by Ofir Marciano.

Defoe should have made Rangers’ dominance pay in the 20th minute when a Tavernier pass sent him scampering clear, only to screw wide with just Marciano to beat.

Hibs were finally breached five minutes from the break. Ryan Jack cut the visitors open with an incisive chipped ball through to Steven Davis, who squared for Defoe to fire home his eighth goal of the season.

Daniel Candeias, on for Kent at the break, missed a glaring chance to double the lead when he slashed a shot into the side-netting after good build-up play from Arfield.

It took until 64 minutes for Hibs to create a clear-cut opportunity as Thomas Agyepong blasted wide from 10 yards.

But Rangers, with Alfredo Morelos making a late appearance from the bench after his four-match ban, eased off in the second half and were almost punished.

A Fraser Murray cross was deflected into Kamberi’s path six yards out, only for McGregor to superbly save. The keeper let his side down, though, when he followed through on a kick upfield to needlessly lash out at McNulty on the edge of the box and receive a straight red card.

However, Hibs failed to put McCrorie under any pressure as Heckingbottom’s unbeaten league record slipped away.