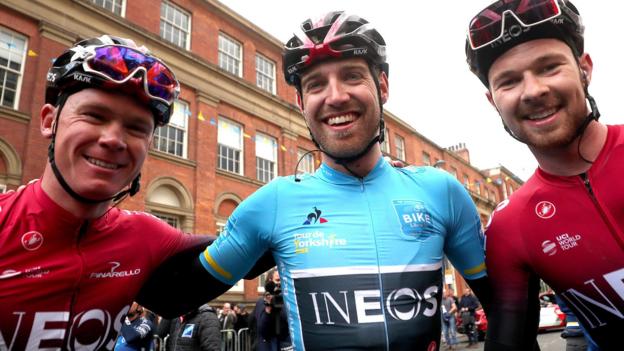 Britain’s Chris Lawless won the Tour de Yorkshire after a superb ride on the final stage from Halifax to Leeds.

Lawless, racing in the blue jersey as the overnight leader, finished right behind stage winner Greg van Avermaet to secure a debut win for Team Ineos.

“I can’t believe it,” Lawless told ITV 4. “If someone had told me I’d win this race before it started I’d have called them a liar.

“I started losing touch halfway up the Otley Chevin but I knew if I could get back on there was a climb around 5km from the finish that I could get over.

“I knew I could follow Greg van Avermaet when he went. Greg was someone I looked up to when I first started riding so to beat him is special.

“I’ve got to thank the team for backing me because I don’t have a good history on stages like this but they said they’d give me a chance.”

When asked how big a win it is for him personally, he replied: “The biggest.”

Find out how to get into cycling with our special guide.