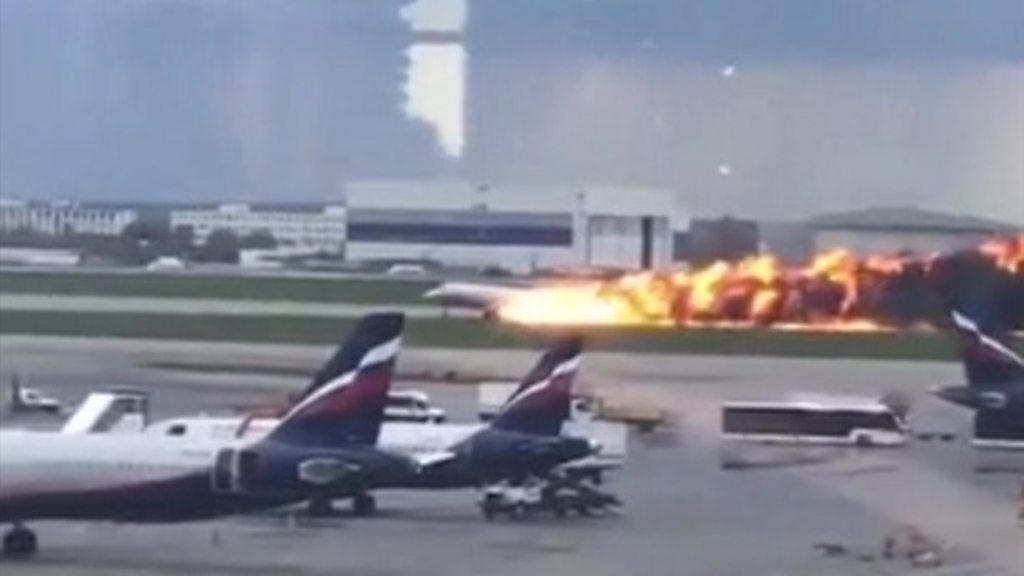 Passengers and crew on board a jet that was forced to make an emergency landing at a Moscow airport say it was struck by lightning moments before it crashed.

Reports of the strike came as survivors told how they escaped the Aeroflot jet which burst into flames on landing at Sheremetyevo airport on Sunday.

Forty-one of the 73 passengers and five crew were killed in the accident.

Investigators probing the cause of the crash have made no official comment on the claims it was hit by lightning.

Modern aircraft are built to withstand lightning strikes, and Russia’s national carrier has said only that the plane returned to the airport for “technical reasons”.

However passengers said the plane was struck just after takeoff, and crew members also said lightning appeared to be responsible for a loss of communication with air traffic control.

Dramatic video pictures showed the plane making a very bumpy landing, bursting into flames after bouncing on the tarmac.

What have passengers and witnesses said?

One passenger who survived the crash, Petr Egorov, was quoted as saying that the flight “had just taken off and the aircraft was hit by lightning”, adding: “The landing was rough – I almost passed out from fear.”

Another survivor, Mikhail Savchenko, said he managed to escape by jumping out onto the emergency exit slides at the front of the Aeroflot jet while the rear was ablaze.

Another witnesses said the plane “jumped like a grasshopper” as it struck the runway at speed.

Passenger Dmitry Khlebushkin told reporters: “I’m alive only thanks to the stewardesses. The girls stood there in the smoke, it was dark, extremely hot, but they pulled people out and helped them get down the chutes”.

Stewardess Tatyana Kasatkina said people were leaving their seats and heading for the exits while the plane was still travelling, Russian news site Lenta reports. She said passengers were screaming and phoning relatives as the plane burned.

“It all happened really fast, in a matter of seconds… I was pushing passengers out. I grabbed each one by the collar, so that they wouldn’t delay the evacuation.”

Passengers were evacuated within 55 seconds of the plane coming to a standstill, the airline said.

Footage of passengers running away from the burning plane have also been shared on social media.

Eyewitness Alyona Osokina told told Russia’s TV Rain she saw the aircraft moving along the runway in flames, adding that “the blaze was devouring the plane”.

“We were witnesses to this horror, right in front of our eyes we saw an airplane on fire streaking down the runway”.

Another eyewitness, Patrick Horlacher, told the BBC it was “shocking to see” the plane being ravaged by flames just minutes before he was due to board another flight.

What happened to the plane?

The aircraft, a Sukhoi Superjet-100, left the airport at 18:02 local time (15:02 GMT) on Sunday, bound for the northern Russian city of Murmansk.

Its crew sent a distress signal when “malfunctions” occurred in bad weather shortly after take-off.

The aircraft then attempted two emergency landings. On the first approach the plane was travelling too fast and on the second the automatic systems failed, Russian news agency Interfax said.

The jet hit the tarmac three times and smashed its rear undercarriage, then debris got into an engine and set it ablaze, Interfax reported.

The aircraft landed with full fuel tanks because the crew lost contact with air traffic controllers and decided it was too dangerous to dump fuel over Moscow, the agency added.

“There are 37 survivors – 33 passengers and four members of the crew,” said Yelena Markovskaya, an official involved in the investigation of the crash.

Aeroflot published a list of survivors (in Russian) who have been identified so far.

Russia’s emergency ministry said there were no plans to ground its Superjet-100 aircraft.

Russian President Vladimir Putin has reportedly been briefed and expressed condolences to the families of victims.

The region of Murmansk has announced a three-day mourning period.

Can lightning bring down a plane?

With millions of commercial flights taking place every year, lightning strikes in the air are relatively common.

Traditional planes, built using aluminium, are usually able to withstand such strikes as the shell or “skin” of the aircraft acts as a cage, distributing the electricity without causing damage and allowing them to continue their journey safely.

Some newer aircraft are constructed using lighter materials that have lower electrical conductivity, such as carbon fibre, which need to be protected – often using wire mesh or foil.

In addition, the electronics and connections to an aircraft’s fuel tanks are heavily shielded to protect them from external electrical bursts.

Lightning strikes can cause technical malfunctions, causing planes to divert or make emergency landings for precautionary reasons. But crashes following such incidents are rare.

A strike is still likely to be noticed by people on board, though. Passengers may hear loud bangs or experience the cabin lighting up with a bright flash.

Have you been affected? Email [email protected]

Please include a contact number if you are willing to speak to a BBC journalist. You can also contact us in the following ways: