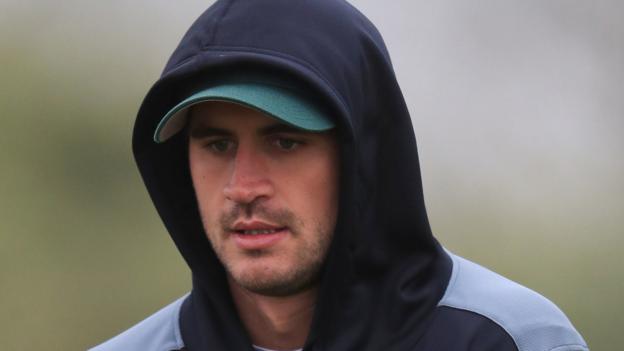 Former England captain Michael Vaughan says Alex Hales “has lost the trust of the team” and questioned if the batsman can make an international return.

Hales, 30, was withdrawn from the squad for an “off-field incident” that led to his second England suspension.

“I don’t know how he comes back from this,” Vaughan said on BBC Radio 5 Live’s Tuffers and Vaughan podcast.

“He has lost the opportunity of playing for his country in a World Cup on home soil and he’ll live with that forever.”

Hales was first suspended by England following his punishment – which also included a fine – for an incident involving Ben Stokes outside a Bristol nightclub in September 2017.

The latest refers to an “off-field incident last year”, which the Guardian reported as a positive test for recreational drugs.

England one-day captain Eoin Morgan confirmed last week that the omission of Hales was agreed among senior players because of what he described as a “complete breakdown in trust” between the Nottinghamshire batsman and the rest of the squad.

“It is a message to Alex Hales that this England side isn’t going to mess around anymore. Bristol was a line in the sand moment, they all realise they have to be better role models.

“Alex Hales was on a 12-month suspended sentence from his actions in Bristol. I don’t know how he comes back from this, he has lost the trust of the team.

“It’s not a great look for the game but I think the England team have dealt with it in the best way they can. The conversation with Hales would have been hard but easy in a way because he has let them down.

“If you’re a professional sports person not thinking clearly you are not in a position to represent your country in a World Cup.

“I just hope he gets some quality people around him to give him advice.”

‘Archer should play in World Cup and Ashes’

Meanwhile, Vaughan believes Sussex all-rounder Jofra Archer should be a certainty for England’s World Cup squad and also feature in the Ashes series that starts in August.

The 24-year-old, born in Barbados to a British father, qualified to play for England in March and made his debut against Ireland last week, before impressing with two wickets and a run-out in Sunday’s T20 victory over Pakistan.

In first-class cricket he has taken 131 wickets in 28 matches with a best of 7-67 and has also compiled six half-centuries.

“I don’t have any concerns with Jofra, he’s a high-class longer-format bowler and I would have him playing one or two Test matches in the Ashes series, I think he will play a part,” said the 2005 Ashes-winning skipper.

“England will need pace. Mark Wood you can’t think will play five Test matches and they will need that pace, particularly if the balls they are playing with this year are not doing as much as we have seen in the past. Pace will play a big part.”

In the shortest format, Archer claimed successive three-wicket hauls playing for Rajasthan Royals in this year’s Indian Premier League and Vaughan said: “I like him a lot, as soon as I heard England were looking at him it was a no-brainer for me, this guy knows how to deal with the pressure.

“When you see skill, pace, variation, the ability to bowl that bouncer without any distinct change of action, he will make the England team better. You’ve got to take emotions out and pick your best 15.

“The England team is a group of mates, unfortunately one of those mates is going to miss out because Archer is going to be in the 15, he is something special.