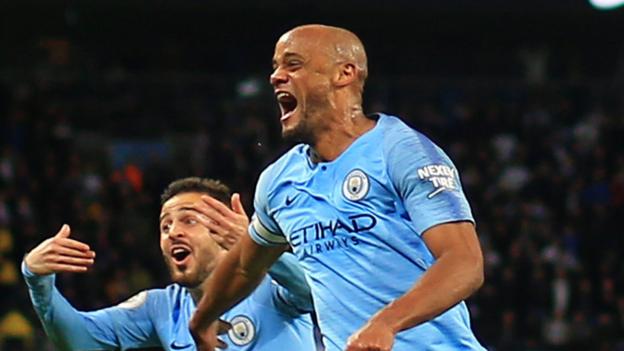 Manchester City are one win away from the Premier League title after a stunning goal from Vincent Kompany secured victory against Leicester.

A tense first half ended goalless and City’s nerves were palpable after Sergio Aguero was denied twice.

City skipper Kompany produced the game’s decisive moment after the break with a breathtaking 30-yard strike.

The result puts Pep Guardiola’s side a point ahead of second-placed Liverpool with just one league match left.

If the defending champions beat Brighton in their final fixture they will amass 98 points and cannot be caught by the Merseyside club.

City would also become the first club to secure back-to-back Premier League titles since rivals Manchester United in 2007-08 and 2008-09.