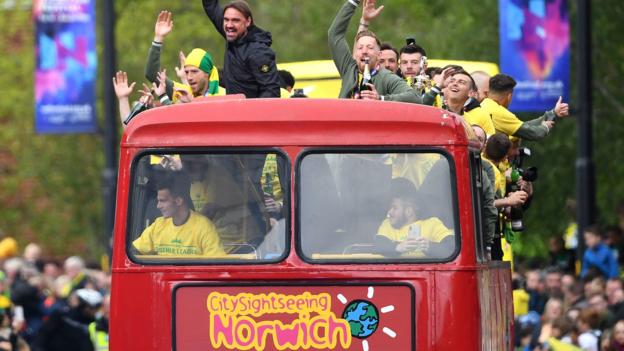 Anyone who has seen Norwich City this season will know they never park the bus – but they were left with no choice after their promotion parade vehicle broke down as they celebrated reaching the Premier League.

The Canaries, who sealed the Championship title on Sunday, were forced to ditch their specially-decorated yellow bus for a city sightseeing model as they paraded the trophy on an open-top tour.

It was reminiscent of a scene from the film Mike Bassett: England Manager, in which the Norwich parade bus takes a wrong turn onto a dual carriageway as they marked winning the fictional Mr Clutch Cup.

It is also a tale one of the city’s most famous ‘sons’, Alan Partridge, would likely be proud of – especially with the city centre being pedestrianised for Monday’s event.

Broadcaster and fan Jake Humphrey opened the celebrations on the balcony at City Hall with players and officials speaking to the crowd before stepping aboard their ill-fated bus.

“It’s really outstanding what this club and these supporters and this place has achieved during this season,” said head coach Daniel Farke.

“All words are right. So world-class, special, unique, extraordinary. We are all unbelievably proud.”