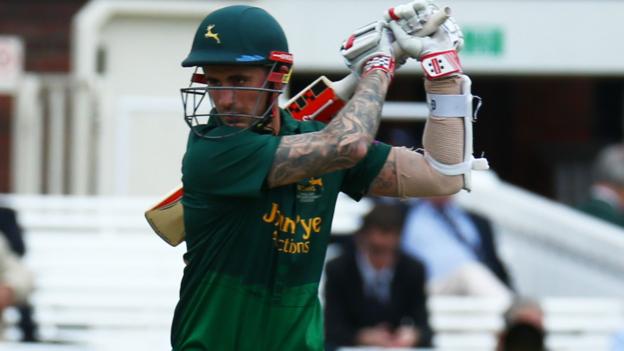 Samit Patel hit a brilliant unbeaten 136 off 124 balls as Notts beat Northamptonshire by one wicket to secure a home One-Day Cup semi-final.

Patel hit the first three balls of the final over for a six and two fours to see them to 328-9 at Wantage Road.

Team-mate Alex Hales earlier took 36, to go with three catches, in his first game since being axed from England’s World Cup plans.

Northants made 325-7 in their innings, with four batsmen passing 50.

The win was Nottinghamshire’s sixth in their eight group games and ensured they finished top of North Group, thereby ensuring direct passage to the last four.

Worcestershire, who defeated Derbyshire, and Lancashire also progressed to the knockout stages from the group.

Notts were left with a daunting run-chase after Ricardo Vasconcelos (74), Rob Keogh (71), Josh Cobb (63) and Alex Wakely (53) carried the Northants total well beyond 300.

Hales went in at the fall of Joe Clarke and looked in good touch as the home attack gave him too much room outside of stump.

But he eventually played on to Luke Procter, leaving the score on 74-4 in the 15th over.

Patel, though, added 111 in 15 overs with Tom Moores (69) and was still there at the end as the visitors snatched a thrilling win.