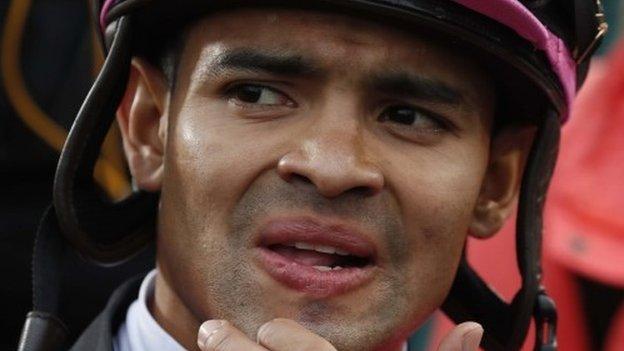 The owner of Maximum Security is to appeal against the controversial decision to disqualify his horse as Kentucky Derby winner.

Country House was declared victor after the horse first past the post was ruled to have impeded rivals on Saturday.

Gary West, owner of the favourite Maximum Security, said he would file an appeal on Monday.

Critics of the disqualification include US President Donald Trump, who said the decision was “not a good one”.

Maximum Security veered out of line on the final turn and impeded War of Will and Long Range Toddy.

Trump said on Twitter: “It was a rough and tumble race on a wet and sloppy track, actually, a beautiful thing to watch.

“Only in these days of political correctness could such an overturn occur. The best horse did NOT win the Kentucky Derby – not even close.”

The Kentucky Derby is the first leg of the Triple Crown – followed by the Preakness Stakes on 18 May and the Belmont Stakes three weeks later.

West said Maximum Security, who was ridden by Luis Saez for trainer Jason Servis, is unlikely to run in the second race, with his chance of sealing the treble almost certainly gone.

“Appeals historically take some time to sort out. Win, lose or draw, we’re not going to know the outcome of until probably months, if not years, down the road,” he said.

“When you’re not going for the Triple Crown, sometimes it doesn’t make sense to wheel the horse back in two weeks.”

The stewards cited a section of the rules that calls for disqualification if “a leading horse or any other horse in a race swerves or is ridden to either side so as to interfere with, intimidate, or impede any other horse or jockey”.

Chief steward Barbara Borden said in a news conference that she and two other stewards interviewed riders and studied video replays of the incident during a 22-minute review after the finish.

They found Maximum Security guilty of interference and awarded the race to 65-1 outsider Country House.

Country House’s trainer Bill Mott is not keen on entering the Preakness and would rather wait for the third leg, the Belmont Stakes.

“I think if you run back in the Preakness – maybe you hit the board, maybe you don’t, maybe you win – but it probably compromises his chances a little bit to win the Belmont,” he said.

No horse had ever been disqualified immediately after winning the United States’ biggest race – though Dancer’s Image was stripped of the title in 1968 after a post-race test showed traces of a banned substance.