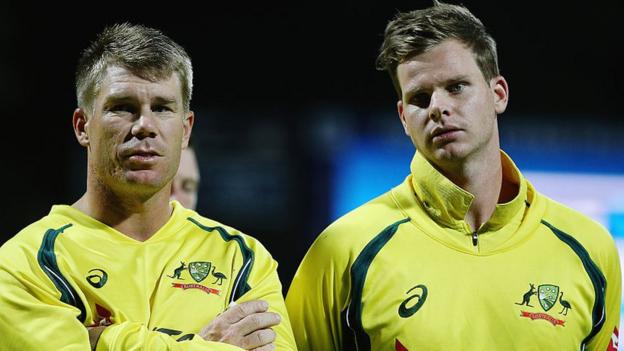 David Warner impressed with the bat and Steve Smith took a fine catch on their first outings in Australia colours since a ball-tampering scandal.

Former captain Smith, 29, and vice-captain Warner, 32, were given 12-month bans and fined for their roles in the ball tampering incident in March 2018.

They returned in a World Cup warm-up against a New Zealand XI on Monday.

Warner scored 39 off 43 balls while Smith took a one-handed diving catch as the Australia XI won by one wicket.

The match was an unofficial game and did not count as a one-day international.

Warner, batting at number three, had a nervous start and was dropped in the gully when yet to score.

But he hammered six fours and a six in his knock before top-edging a reverse sweep to be caught in close.

Warner’s display, coupled with opener Usman Khawaja’s cheap dismissal for four, is likely to fuel the debate about Australia’s ideal opening partnership for their World Cup title defence in England.

Smith and Warner’s ball-tampering bans ended in late March and the pair have been included in Australia’s World Cup squad, while Cameron Bancroft – who was banned for nine months – returned in December.

Australia play Afghanistan in a World Cup warm-up match on 1 June in Bristol.