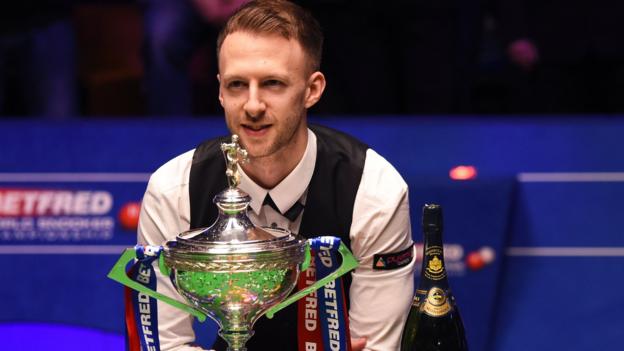 Trump, 29, dismantled John Higgins in a breathtaking final to claim the World Championship for the first time.

And Trump, long touted as a world champion, said it was a relief to finally have “a dream come true”.

A sensational final featured 24 breaks of 50 or more from 27 frames, including a record 11 centuries.

Bristol’s Trump won the Masters in January by thrashing Ronnie O’Sullivan in the final and adding that to this world title and his 2011 UK Championship triumph means he becomes only the 11th player to complete the Triple Crown.

Hendry told BBC Sport: “His all-round game is incredible. He has dominated John Higgins in every department and John is someone who goes down in history as one of the best all-round players in the game.

“He did the same to Ronnie O’Sullivan in the Masters final and it shows that we could be in for an era of dominance from one player.

“He went public saying he has dedicated his life to winning tournaments. He has not done that in the past and now he is doing that he is reaping the benefits.

“I certainly have not seen anything like that standard in a final, it was incredible. The scoring was phenomenal. Every time a player got an opportunity they cleared up in one visit.

“Judd’s performance in the final has been one of the most dominant I have ever seen.”

Victory at the Crucible Theatre means Trump moves up to second in the world rankings behind leader O’Sullivan.

Steve Davis won six world titles in the 1980s, Scot Hendry went one better during the 90s, while O’Sullivan has won five since the turn of the century.

“It’s just a matter of how many he can get now he’s got that monkey off his back,” O’Sullivan, who suffered a shock first-round defeat against amateur James Cahill, told Eurosport.

“It’s not easy to win the world title, 17 days is different to any other tournament. He’s worked hard, got the right people around him, he’s focussed on what he needs to do and that’s the difference. You need to have everything in place to become the ultimate player.

“He’s hungry, he’s really worked on his game and he’s better than he ever has been and I think it will take a generation of players to catch up and play the sort of game he’s playing.

“Judd Trump is a special player and a special talent and he deserves to be world champion.”

Trump made a record equalling seven centuries in the final, while Higgins made four.

“I am not going to get too carried away but if I put the work in like I did this season and go back with the hunger as if I have not won anything, I hope to win more” said Trump.

“It will be nice to relax going into events with people not asking when I will be winning the World Championship. It is nice to get that out of the way and give it my best shot in the tournament.

“You don’t want to get to 40, 45 and not have won the world title. I came so close last time and threw it away a little bit. It was nice to be able to see it out this time and I am very pleased with how I played throughout the whole final. During the week I was not the best but managed to dig in.

“It is amazing to win an event but to do it with the best standard ever been known in a final is incredible. I need to sit down and watch it all back, I cannot remember too much of it. It happened so fast out there.”

Higgins, now a beaten finalist the last three years and four overall, said: “It was sustained brilliance, there was nothing I could do. He does not just overpower the opponent, he overpowers the snooker table. There is no shot he cannot play, it is pretty daunting when he is like that.

“The way he dismantled O’Sullivan in the Masters final and the standard he played against me, it must give him an enormous about of confidence, it is incredible. If someone is doing that to you, you just have to take your hat off to them.

Asked if Trump’s talents compared to any other player, Higgins said: “No, there has not been anybody quite like him.”

And how will the new world champion use his winnings? When asked by a reporter about his plans for the £500k prize money, Trump responded:

“I don’t know yet, but when it hits my bank account I think I’ll go wild.”