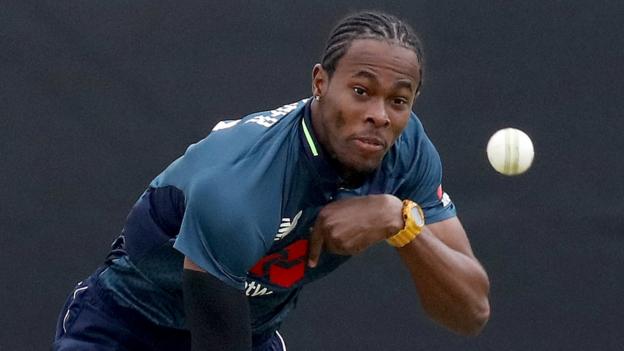 Former captain Andrew Flintoff says he would drop “anyone” from England’s World Cup squad to include all-rounder Jofra Archer.

Archer, 24, has impressed in his first two England appearances, taking three wickets and bowling in excess of 90mph.

He is not in the preliminary World Cup squad, but can force his way into the 15 during five one-day internationals against Pakistan this month, starting at The Oval on Wednesday.

“Who I would get rid of? Anyone. He’s brilliant.”

Sussex fast bowler Archer was born in Barbados to a British father and qualified to play for England in March.

Already a regular in T20 leagues around the world, he took his first England wicket on ODI debut in victory over Ireland on Friday, bowling Mark Adair with a 90.3mph yorker.

In his Twenty20 international debut against Pakistan on Sunday, Archer took 2-29 and pulled off a direct-hit run-out as England won by seven wickets.

“He is unbelievable – I was watching him bowl the other day and I found it so frustrating that a bloke can bowl so fast with what looks like so little effort,” Flintoff said.

“He has so much control, all the tricks – slower balls, bouncers, yorkers – and he bats as well.”

‘Parachuting someone in is not the issue’

Flintoff, who played in three World Cups, said Archer’s inclusion should not disrupt the harmony of the world number one ODI side.

In March, England all-rounder David Willey said he “didn’t know” if “someone should just walk in at the drop of a hat because they’re available”.

In addition, England bowler Mark Wood has spoken about not wanting to see an established bowler left out, while all-rounder Chris Woakes raised similar concerns, though Archer said all three had been “very welcoming” and sought to clarify their comments.

Flintoff compared the situation to the decision to call up Kevin Pietersen to the 2005 Ashes squad over Graham Thorpe, who won 100 Test caps.

“That wasn’t popular with everyone because Thorpey had come back in the side and scored a hundred against South Africa, but Kev showed the way to take them on,” Flintoff said.

“Archer has that same ability to surprise people, to lead the way and raise the bar.

“Team spirit is born out of winning, I played in a lot of sides, and the only ones that had team spirit were the successful ones. Parachuting someone in is not the issue.”

Flintoff said he would “make sure I raised my game” if he felt it was his World Cup place at risk.

“It’s a good position for England to be in – competition for places is what you always want, especially in one-day cricket because apart from these last few years we’ve never been very good at it,” he added.

After the five-match series against Pakistan, England face Australia and Afghanistan in two warm-up matches before starting their World Cup campaign against South Africa at The Oval on 30 May.