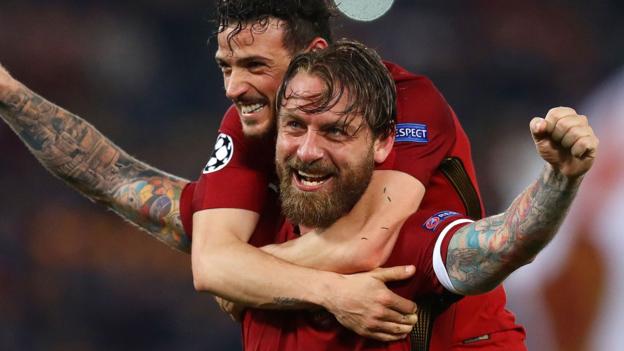 A late Lionel Messi masterclass at the Nou Camp left Liverpool’s hopes of a second successive Champions League final dangling by a thread – but there have been enough dramatic turnarounds in recent seasons to suggest all is not lost for the Premier League side.

The prospect of an all-English final may look slim after the Reds’ 3-0 first-leg defeat and Tottenham’s 1-0 home loss to Ajax.

But some of the biggest moments in Champions League history involve teams fighting back from big deficits to defy the odds, including a remarkable collapse from Barcelona last season as they squandered – you guessed it – a three-goal first-leg lead.

Here, we take a look back at some of the turnarounds that suggest anything is possible, and you can vote for which one you think is the greatest comeback.

And – Manchester United fans – we haven’t included that night because this is about overturning bigger deficits.

Barcelona looked to have this quarter-final tie sewn up in the first leg at the Nou Camp after Gerard Pique and Luis Suarez added to own goals from Daniele de Rossi and Kostas Manolas.

But what looked like a consolation in the 80th minute from former Manchester City striker Edin Dzeko proved to be crucial.

The Bosnian put Roma ahead after just six minutes in the return leg before a De Rossi penalty and a Manolas header atoned for their Nou Camp mistakes and led the Italian side to an unfathomable win on away goals. Cue madness in the Stadio Olympico stands.

After the match, Dzeko said: “Nobody believed in us before the game – they gave us a 5% chance of winning. The win is difficult to describe. We will enjoy the semi-finals – I do not fear anyone.”

The dream didn’t last much longer for Roma, as they were beaten 5-2 at Anfield by Liverpool and 7-6 on aggregate.

While Barcelona have been on the receiving end of a ridiculous revival before, Liverpool have mounted their own memorable fightback.

While all the other entries on this list happened over two legs, the Reds squeezed their comeback into 45 second-half minutes (plus extra time and penalties) in the 2005 final.

A rollercoaster of emotion from start to finish, this was one of the gutsiest comebacks in the history of the Champions League. What was meant to be Liverpool’s big moment quickly fell to pieces, with Milan captain Paolo Maldini grabbing a first-minute lead before Hernan Crespo scored twice to put Milan 3-0 up.

The game looked over at half-time but six mad second-half minutes saw captain and talisman Steven Gerrard, Vladimir Smicer and Xabi Alonso score to level the tie and take it to penalties. Liverpool won the shootout with goalkeeper Jerzy Dudek the hero and Gerrard declaring his love of the club soon after, having been heavily linked with a move to Chelsea.

“How can I think of leaving Liverpool on a night like this?” he said, before taking the trophy to bed with him.

Two goals from Napoli’s Ezequiel Lavezzi either side of an Edinson Cavani header cancelled out Juan Mata’s early volley in a scintillating performance at the San Paulo Stadium that put the Italians firmly on course for the quarter-finals.

Two weeks later Roberto di Matteo had replaced Andre Villas-Boas as Chelsea’s caretaker manager in a desperate attempt to galvanise the players and rescue the season.

It had the desired effect as Didier Drogba, John Terry and Frank Lampard all scored to take the tie to extra time at Stamford Bridge.

After Branislav Ivanovic’s dramatic winner sent Chelsea through, Di Matteo said: “I’ve had some great nights but I think this will go down in the club’s history.”

He was right, as his Blues went on to win their first and only Champions League title – beating Bayern Munich on penalties at their own stadium.

“Miracles often happen, things you might not rationally expect,” Deportivo coach Javier Irureta said after his side were hammered 4-1 by reigning champions AC Milan in the first leg of their 2003-04 quarter-final.

His words were prophetic as a Milan side containing Maldini, Alessandro Nesta, Cafu, Clarence Seedorf, Andrea Pirlo, Kaka and Andriy Shevchenko were stunned in the second leg.

A single goal from a Porto side managed by a young Jose Mourinho – who would go on to win the competition – deprived them of a place in the final.

Chelsea fans were dreaming after eight glorious first-half minutes saw a trademark Gianfranco Zola free-kick and a Tore Andre Flo double give them a stunning 3-0 first-leg lead at Stamford Bridge and put a semi-final place in sight, before Luis Figo struck to give Barcelona the away goal they needed to take back to the Nou Camp.

Extra-time goals from Rivaldo and Patrick Kluivert in the second leg denied Chelsea a memorable victory. Barca would go on to lose to Valencia in the semis.

The only time any side has overturned a four-goal aggregate lead.

What followed was nothing short of extraordinary.

Barcelona knew they had to go for it in the return leg and gave themselves a chance with three goals in the first 50 minutes at the Nou Camp. Cavani then struck for PSG to seemingly end the tie and leave their opponents needing three more goals to advance.

In the most incredible finale, Neymar scored in the 88th and 91st minute against his future employers before Sergi Roberto’s 95th-minute winner completed a turnaround that had to be seen to be believed.

“Utter mayhem” and “deep, instinctive passion at its most authentic and unrefined” were seen by BBC Sport’s Spanish football writer Andy West after the full-time whistle.

A late penalty. VAR. A Neymar rant. This game had it all.

Manchester United were flying with 10 wins in 11 games after Ole Gunnar Solskjaer had taken over as caretaker manager following the dismissal of Jose Mourinho and welcomed PSG with renewed optimism.

But they were outclassed by the French side at Old Trafford, with second-half goals from Presnel Kimpembe and Kylian Mbappe leaving them with the task of overturning a two-goal deficit away from home – a feat never achieved before. They would also need to do it without Paul Pogba, who had been sent off for two yellow cards.

Deep into injury time in the second leg, United led 2-1 on the night, following first-half goals from Romelu Lukaku (two) and PSG’s Juan Bernat, but the hosts were set for a 3-2 aggregate win and a place in the quarter-finals. Then Diogo Dalot’s shot deflected behind off Presnel Kimpembe for a corner.

Or so we thought.

After looking again at the incident using VAR, Slovenian referee Damir Skomina decided it had struck Kimpembe’s arm and awarded United a controversial penalty to the astonishment of the home crowd. Marcus Rashford stepped up to drill the ball home and send his team through, shattering PSG’s Champions League dream once again.

Neymar, who missed the game through injury, could not contain his anger at the decision. In a social media rage, he said: “It’s a disgrace. Four guys who know nothing about football watch a slow-motion replay in front of the television.”