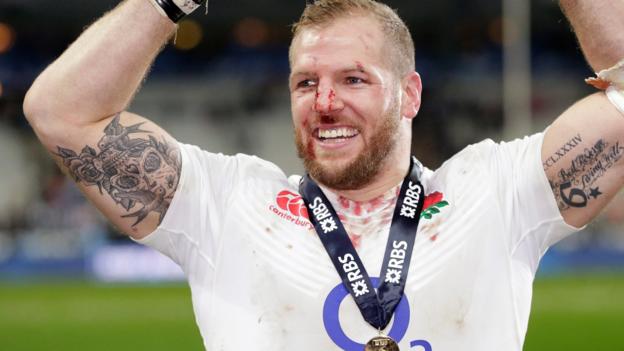 England flanker James Haskell says he will find it “really hard” to adapt to life after rugby after announcing he will retire at the end of the season.

The back row, 34, was capped 77 times by his country, winning three Six Nations titles, including a Grand Slam.

Haskell recalls telling his Northampton team-mates of his retirement decision.

“I said goodbye to the lads the other day and I broke down, I blubbed in front of them. I couldn’t get my words out. I didn’t expect that,” he said.

“I said to the lads I was just going to say a few words but I just couldn’t speak and I cried. There are a lot of emotions with it.”

He already has business ventures in health and fitness programmes and DJ-ing, which he did alongside his playing career.

“Finding my feet again is going to be really hard. I’m lucky, my wife is amazing, she spotted it coming and I do have good days and bad days,” Haskell added.

“A lot of people come up to me and say, ‘you’ll be alright, you’ve done this, it’s impressive’, but it’s as terrifying as if I had never done anything.”

‘Jones got the best out of me’

Haskell toured with the British and Irish Lions to New Zealand in 2017 after being part of the England team who won the Grand Slam in 2016 and whitewashed Australia on tour that summer.

He said he believed his international career was over after the 2015 World Cup, but came back into the fold when Eddie Jones was appointed head coach.

“My best games for England were under Eddie Jones,” he said.

“Eddie out of everyone treated me in a way that got the best out of me.

“He understood that I was a guy who needed an arm around me, needed my tyres pumped up, someone to believe in me and actively want to help me.”