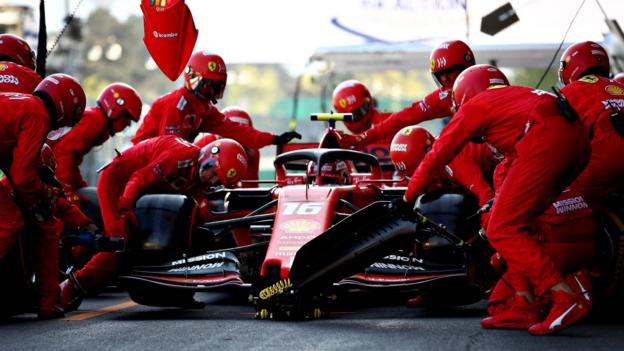 Ferrari are introducing an upgraded engine two races early at this weekend’s Spanish Grand Prix, as they seek to end Mercedes’ domination.

Mercedes have taken one-twos in all four races so far this season with reliability problems and driver errors scuppering Ferrari’s chances.

The new engine will use a new fuel, which also increases performance, and the car will have aerodynamic upgrades.

Binotto, who said the engine had originally been scheduled for the Canadian Grand Prix next month, said Ferrari had made a “big team effort to bring these developments forward”.

He added: “We are behind in the championship and we have to catch up, which we know means that our development work will be the key to this season.”

Ferrari’s best results this season are three third places – two for Sebastian Vettel in China and Azerbaijan and one for Charles Leclerc in Bahrain.

Leclerc, in his first season with the team, was on course for a dominant victory in Bahrain before his engine lost power in the closing stages. Vettel was unable to capitalise because he had spun after being passed by Mercedes’ Lewis Hamilton.

Leclerc also looked favourite for victory in the last race in Baku, but a crash in second qualifying ended his hopes.

Spanish Grand Prix is held on the Circuit de Barcelona-Catalunya, where Ferrari’s form in pre-season testing led Mercedes to erroneously conclude they were going into the season behind their rivals.

Vettel said: “I’ve always had very positive weekends in Barcelona with Ferrari, even if we’ve never won. I hope this might be the moment to put that right.”

Ferrari believe their struggles this season in the races where they have lagged behind Mercedes are largely to do with failing to get the best out of the tyres, rather than any fundamental pace deficit in the car.

Leclerc said: “This is probably the track where it’s hardest for the driver to make a difference.

“The reason is simple – each one of us knows it by heart, right down to the smallest detail, as it’s home to the majority of tests.

“I have good memories from February’s testing, even if the conditions were very different back then, with very low air and track temperatures.

“All the same, the Barcelona-Catalunya circuit is a benchmark, because if you go well here, you know you have a competitive car.”

No ‘complacency’ from Mercedes

Mercedes boss Toto Wolff said there would be “no complacency” in Spain despite the unprecedented winning start to the season.

“We know that it’s not truly representative of the balance of power this season so far,” he said.

“The Spanish Grand Prix will be anything but easy. Despite the good start to the season we remain quite sceptical of our own performance and know that there are a number of areas where we can and must improve.

“We anticipate a tough and competitive weekend, first against our rivals and also between our drivers.”