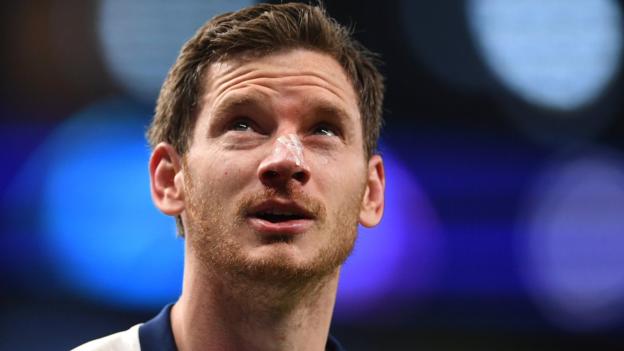 How to follow:
Listen on BBC Radio 5 Live from 19:00 BST; live text commentary on the BBC Sport website and app

Tottenham defender Jan Vertonghen could play in the Champions League semi-final second leg against Ajax as Spurs look to overturn a one-goal deficit.

Vertonghen suffered a head injury in a nasty collision with team-mate Toby Alderweireld and Ajax goalkeeper Andre Onana during the first leg in London.

But tests revealed that Vertonghen had not been concussed and he may play in Amsterdam wearing a protective mask.

The winners will play either Barcelona or Liverpool in the final in Madrid on 1 June, with the Spanish club leading 3-0 after the first leg.

Son Heung-min will return for Tottenham after missing the first leg through suspension and is expected to play up front with England striker Harry Kane still out with an ankle injury.

Vertonghen could replace Davinson Sanchez, who picked up a thigh injury in the 1-0 loss at Bournemouth on Saturday, with winger Erik Lamela and full-back Serge Aurier both available after hamstring injuries.

Tottenham have had an extra day to prepare as Ajax beat Willem II 4-0 in the final of the Dutch Cup on Sunday, but Erik ten Hag said he had a fully-fit squad to choose from with forward David Neres available after recovering from a foot injury.

‘The tie is still open’

Tottenham boss Mauricio Pochettino remains confident that his side could reach a Champions League final for the first time.

He said: “The negative result in the first leg obviously makes it more difficult, but the tie is still open. We know we need to win and perform to our best. It’s an exciting moment for us.

“Nobody thought we would have the possibility in the last week of the season to reach the final of the Champions League. Now we need to enjoy this moment and believe.”

“We’re all excited to be a part of the semi-finals of the Champions League, but we don’t want to stop here,” he said. “We need to play full of energy and full of desire.

“We need to try to find the right energy and try to learn from the first leg.”

Ajax drew with Bayern Munich twice in the group stage, beat 2018 European champions Real Madrid in the last 16 and then eliminated Juventus in the quarter-finals.

The Dutch league leaders will reach the final if they avoid defeat against Tottenham, but coach ten Hag says his side will not sit back and play defensively.

“We need to win this match, that will be our mindset,” said Ten Hag. “We have to stick to our own strengths.”

“We’re confident we can do it, we’re fit and eager.

“A few people who knew this level of success said it would still be possible for a Dutch team to reach the Champions League final; people like Johan Cruyff, Louis van Gaal and [Ajax director] Marc Overmars. It’s up to us to prove them right.”

Ajax defender Daley Blind, who played for Manchester United when they beat Ajax in the 2017 Europa League final, returned to the Amsterdam club last year.

“I’m not nervous,” said Blind. “I think a little bit of healthy tension is good and comparable to the other matches.

“Just like the other games, and the group phase, they’re all important matches against big opponents and you have to make the best of it during preparation. You have to do that yourself.”

‘Tottenham not out of it’ – statistical analysis

Simon Gleave, head of sports analysis, Gracenote, said: “Tottenham may have lost the first leg of this tie 1-0 at home but they are not totally out of it yet.

He said: “The chance that Spurs will reach this year’s Champions League final in Madrid has reduced to around 29% according to the Euro Club index.

“Tottenham’s chance of winning this season’s Champions League has declined to around 5% but the club’s chance of lifting this trophy has only been higher than that once during the whole competition – before the first leg of this tie.”