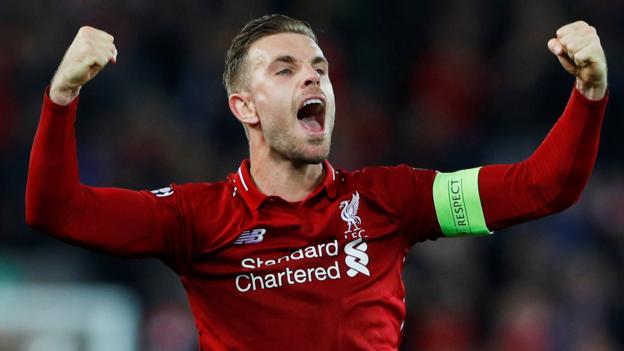 Former England captain Alan Shearer, part of the BBC Radio 5 Live commentary team, was at Anfield to witness Liverpool’s stunning 4-0 victory over Barcelona to win 4-3 on aggregate and reach the Champions League final – and, like many people, could not believe what he was seeing.

The Spanish champions won 3-0 in the first leg and Liverpool were without Mohamed Salah and Roberto Firmino for the return at Anfield but two goals from Divock Origi and another two from substitute Georginio Wijnaldum took the Reds into the final. They will play either Ajax or Tottenham in the final, with the Dutch side holding a 1-0 lead before Wednesday’s second leg in Amsterdam.

How did they do it? Liverpool had belief, hunger, desire, attitude and had a crowd that was willing them on from the very first second.

Jurgen Klopp’s side got the early goal and then they thought ‘we like the taste of this’. They had to rely on their goalkeeper Alisson, who made a number of saves, but a lot of Liverpool players ran Barcelona ragged, they embarrassed them. Liverpool were too clever, it was just a staggering night.

Divock Origi grew in confidence by getting that first goal. He just had such a spring in his step and he knew he had that backline of Barcelona all over the place. It was the same with Sadio Mane. Barcelona didn’t know whether to drop off or go close.

Even before Georginio Wijnaldum’s goals, I picked him out. It’s not easy when you come on but he picked up the pace straight away and was full of aggression. That header from the left [for Liverpool’s third goal] was a sublime one, I would have been proud of that one.

That winning goal was so bright from Trent Alexander-Arnold [whose quickly-taken corner was converted by Origi for the fourth goal]. He looked up, he saw the Barcelona players had his back to him, but Origi was on the same wavelength.

On the Anfield atmosphere…

For me to be here and to sample the atmosphere, I don’t think I’ll see or hear an atmosphere like this again. The atmosphere was just something that took my breath away.

What happened on Monday [Manchester City beating Leicester] would’ve been a kick in the teeth for Liverpool, but to put that behind them like this was incredible.

I’ve played at Anfield when there is a superb atmosphere but this is something else, something special.

I’ve never seen Anfield like this and the fans were driving their players forward from start to finish. It’s just been relentless. It was incredible from all the players. Wow.

It’s up there with the best, if not the best [European nights at Anfield]. Liverpool are virtually unbeatable at this stadium in Europe.

When you talk about the great nights, this is the best ever. It’s absolutely incredible.

Before the game, we were talking about all the superlatives we have for Messi. We can run out of superlatives for Liverpool. It was deserved as well and that’s the best thing about it.

I’m so proud and so delighted to be part of Liverpool. Everything about Liverpool was brilliant.

‘Barcelona were inferior, scared and unable to find answers’ – the view from Spain

Jurgen Klopp understood what happened in the first leg better than Ernesto Valverde. In that game, Liverpool had a lot of chances and played a high tempo that Barcelona struggled with. Klopp said they didn’t do much wrong in the first leg and they did not have to change much, so they did the same again tonight.

For three-quarters of the tie, Barcelona were inferior, scared and unable to find answers. For me, Messi was saying: ‘How do I influence the game?’ For the last hour, where was he? Not many teams have ever done that to him.

After the first leg, Messi warned the Barcelona players that that game was played at the pace Liverpool wanted, and he said they [Barcelona] were all exhausted and couldn’t play at that pace again, but that’s what has happened again.

Find out how to get into football with our special guide.

They fell for a trap. In the wide areas, two or three Liverpool players were always around them. Barcelona tried to look for that extra pass but couldn’t find it and lost possession. Barcelona have not played a team like this in a long, long time.

The fourth goal summed up Barca: mentally and physically slow and complacent, unable to keep up with Liverpool’s speed of thought or legs.

They tried to play with control but Liverpool were too fast and intense, and Barca couldn’t match it. Blown away.

‘Liverpool are favourites to win the Champions League’

I played for a rival but you cannot fail to have respect for this club and these fans on nights like this. We came here looking at Messi in the final.

Liverpool took it out of their hands – their spirit, their fight. What Liverpool produced here is breathtaking. It’s fantastic and the scenes in the stadium – the tears, the emotion – it’s amazing. It’s only really football that does this to you.

Liverpool are favourites [to win the Champions League], no matter who they will be playing. It was painful for their players to suffer the defeat last year [in the final] and that is an advantage for them now as they’ve got unfinished business.

Tottenham are very tired, but Liverpool have managed to keep that energy and belief up. Liverpool would be favourites if Spurs get through. Ajax, with their young players, the expectation, even in the Netherlands people didn’t expect them to get this far.