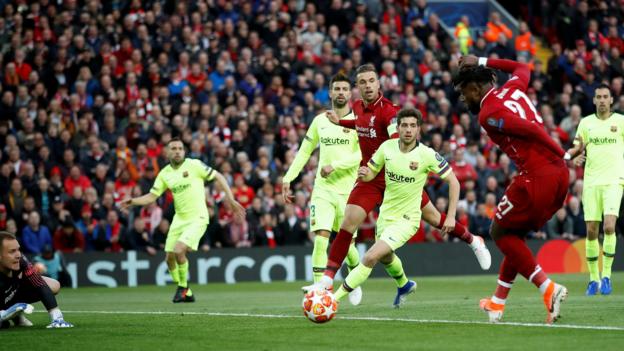 The Reds won 4-0 at Anfield, with Divock Origi scoring the winner from Trent Alexander-Arnold’s quick corner, to overturn a 3-0 first-leg deficit.

“We have to be ready for all the criticism that is going to rain down on us now,” Suarez said.

Barca had looked in control after winning 3-0 at the Nou Camp. Origi gave the Reds hope at Anfield, and half-time substitute Georginio Wijnaldum scored two quickfire goals to level the tie.

The winner came while Barca’s defence were still getting ready for a corner which Alexander-Arnold took quickly to the alert Origi, who pounced to score.

“For their fourth goal we looked like schoolboys,” said former Liverpool striker Suarez, who was booed all night by his old fans.

It was Barcelona’s second Champions League collapse in consecutive seasons. Last season Roma beat them 3-0 in the quarter-final second leg to knock them out on away goals.

“I do not know how it’s going to affect me, here we are, the coach has to take responsibility,” boss Ernesto Valverde said.

Barca have won La Liga both seasons under Valverde, but they have not reached a Champions League final since 2015.

“It’s very painful for us, especially for our people, it’s the second year they’ve come back like that,” he said.

“Things got on top of us after those two quick goals [from Wijnaldum]. We didn’t manage to get on the scoresheet and they rolled us over really,” Valverde said.

“They surprised us with the fourth goal – presumably my players weren’t looking. Liverpool were street smart and they scored.”

Suarez defended his manager after the game. “We are the ones that played the game,” he said.

“The boss used the same tactics as in the first leg and he tried to do the same thing here. You have to say sorry for the attitude and the things that everyone saw today.

“We have to do a lot of self-criticism because this is the second time that the same thing has happened to us. We cannot commit the same mistake two years in a row. There are many things we need to consider and think about.”

Barcelona midfielder Sergio Busquets said: “I apologise to the fans because after the Rome thing, it happens again. It is very hard to fall like that with a good result in the first leg.”