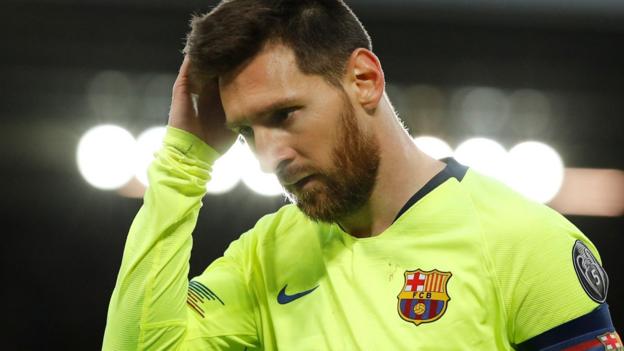 That word has haunted Barcelona all season. Their capitulation against the Italian side in last season’s Champions League quarter-final second leg, after winning the opener by three goals at the Nou Camp, cast a dark shadow which has never been dispelled.

This time around, with another three-goal margin tucked under their belts, surely Barca would head to Anfield with the right lessons learned, ready to ensure they avoided another self-destruction … wouldn’t they?

No, they would not. And the consequences of their horror show at Anfield – no matter how well Liverpool obviously played in a 4-0 win that put the English side into the final 4-3 on aggregate – will be deep and far-reaching.

The immediate reaction from the never-knowingly-understated Spanish press has been predictably (and fairly) ferocious, with Mundo Deportivo labelling it a “debacle”, AS describing it as a “tragedy” and Marca going for “historic failure”.

The inquest will be scathing and remorseless, and one man in particular will be pinpointed…

Despite leading his team to a domestic double in his first season in charge and easily winning another La Liga title this year, Barca manager Ernesto Valverde has struggled to command the affection of the team’s supporters.

That is largely because of the collapse against Roma, but also because many fans believe he does not adhere to the possession game which is deeply imbued within the club’s ‘DNA’, to use the analogy generally employed in Spanish football analysis.

Valverde has, in the eyes of many, strayed far from the team’s high-minded principles by overseeing a well-organised but unimaginative team, competent enough but totally relying on one man – Lionel Messi – for attacking inspiration.

Heaven forbid, he has even veered away from the sacred 4-3-3 formation and regularly employed an industrial-style 4-4-2.

Allegations that Valverde is a cautious and conservative coach, and therefore unsuited to the task of leading Barcelona, will come thick and fast in the wake of this collapse, in which his team failed to score away from home in the Champions League for the fifth time in the two seasons of his tenure.

It is fair to suggest his game plan at Anfield looked incoherent, with the team’s uncertainty stemming from their apparent confusion over whether they were intending to take the game to Liverpool and look for more goals or sit back, defend and strike on the break. As a consequence, they did neither.

The suspicion that Barca were not mentally attuned for the occasion was highlighted by their individual errors, from Jordi Alba’s horrible back header to set up the opening goal to the collective brain freeze which allowed the tie-winner from a quickly-taken corner.

Crucially, Valverde was unable to cajole any reaction as the game unfolded, especially during that golden period of respite for coaches: the half-time interval. Instead of using those 15 minutes to get his team reorganised and re-motivated, Valverde saw his players make an awful start to the second half, conceding two goals in 10 minutes.

In that kind of scenario, inevitably one man ends up bearing the responsibility, and club president Josep Maria Bartomeu has already commented: “The board will make a profound reflection over what has happened here.”

The outcome of those reflections will probably be bad news for Valverde – unless he jumps before he is pushed.

Is Sergio Busquets past it? Can we still rely on Luis Suarez? Is Ivan Rakitic worth a place in the team? Can we trust Ousmane Dembele? How can we get rid of Philippe Coutinho?

The players will not escape scrutiny either, and the summer will probably usher in a period of significant change within the dressing room as Barca bring in some much-needed new blood.

Most urgently, the squad desperately needs more firepower. The fact that one of the wealthiest and most powerful clubs in the world has only one centre-forward, Luis Suarez, is scarcely believable, and the startling lack of options in attack were shockingly exposed on Tuesday night.

With a goal needed in the final stages, Valverde had literally no striker to call upon, with the only other forward in the squad aside from Suarez, Kevin Prince Boateng, not even named on the bench after making zero impact during his strange loan stint at the club.

This is not Valverde’s fault, with responsibility for constructing the squad largely resting with president Bartomeu and director of football Eric Abidal, a former player under Pep Guardiola who beat cancer before returning to the Nou Camp in his current role last year

Abidal has largely done a good job in recruitment but the lack of forwards within the squad is a massive oversight, and quite simply must be rectified this summer. Interest in Antoine Griezmann may well be reawakened despite his rejection of the club last summer, and rising stars including Maxi Gomez (Celta Vigo), Luka Jovic (Eintracht Frankfurt) and Krzysztof Piatek (AC Milan) have all been linked.

Signing top-quality goal-getters of that stature is not a cheap task, though, and Barca will almost certainly attempt to raise finances by finding a buyer for Coutinho, whose mainly miserable spell with the club continued with a pair of nondescript performances in this tie.

There is also concern over the physical aptitude and mental attitude of another costly signing, Dembele, who was ruled out for the second leg (having missed a sitter with the final kick in the first) after suffering the latest in a long line of muscular injuries at the weekend. Dembele will probably be kept, but he will be under heavy pressure to shape up and become a more consistent force.

From the way the midfield was overrun by Liverpool on Tuesday, it is clear that a shake-up is also needed in that department, and one high-profile recruit has already been secured with an agreement to sign Ajax star Frenkie de Jong.

Busquets and Rakitic, who will both be 31 at the start of next season, can no longer be regarded as automatic starters, and the club could attempt to raise funds by cashing in on Rakitic, who rejected a move to Paris St-Germain last summer and has been recently linked with Juventus.

Amid all the expected changes, though, one constant will remain: Lionel Messi did not have a great night at Anfield, with Marca rather gleefully stating that he was “swallowed by Anfield” and “disappeared”.

Messi’s status at the club is truly untouchable and there is no doubt whatsoever that he will remain the focal point of the team next season, but the bigger question is how to build a more varied attack around him so that he is not the only potential match-winner.

Who plays alongside Messi as that process unfolds, and who coaches him, remains to be seen.