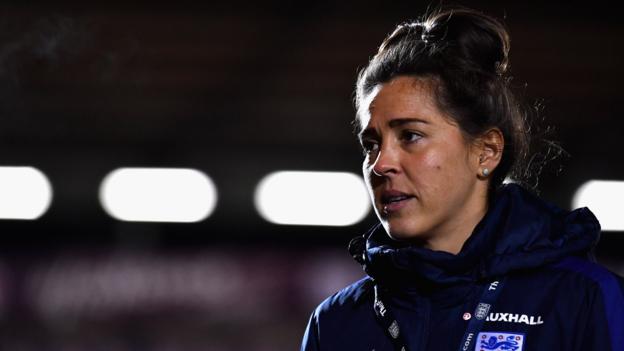 Fara Williams’ England career is not over despite her missing out on their Women’s World Cup squad, manager Phil Neville says.

Williams, 35, is England’s record appearance holder with 168 caps, having made her debut in 2001.

Neville described the Reading midfielder as “one of the greatest footballers England has ever produced”.

“Fara Williams will decide when she wants to stop playing for England,” he said.

Neville suggested that Williams had been “unlucky” to miss out on his 23-strong squad for the tournament in France, which starts on 7 June.

He said: “We both agreed that this season, she wanted to be picked on performance and not on the fact that she’s the most capped player, and that’s what I’ve judged her on.

“I have got to say her performances in the last three months have been sensational.

“The only thing is the players who are in the squad have been performing to a brilliant level too and that’s where I would say she has been really unlucky.”

Neville added that the Football Association will pay tribute to Williams when she does decide to retire from playing.

He said: “When she sees fit that she doesn’t want to play for England or Reading any more. then the FA will make sure that she gets the send-off and respect that she deserves.

“When you look at the board at St George’s Park, she stands alone as one of the greatest footballers England has ever produced on both the men’s and the women’s side.

“We have nothing but the utmost respect for her as a person and a player.”