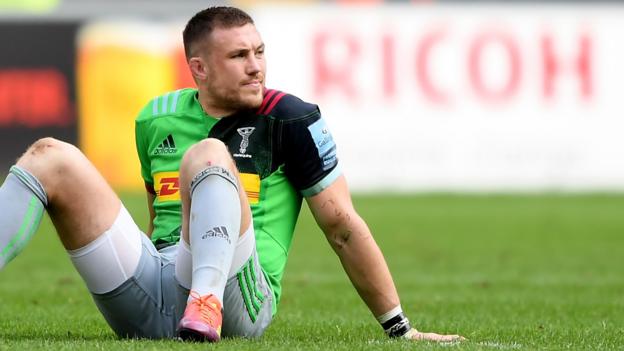 Exeter Chiefs will host Northampton Saints and Saracens are to face Gloucester in the Premiership play-off semi-finals after a chaotic final day of the regular season.

The two matches will be played back-to-back on 25 May, with live text and radio commentary of both on the BBC Sport website and app.

For long periods on Saturday, however, it was far from clear who would be battling it out for a spot at Twickenham.

Going into the final round of fixtures just one point separated fourth-placed Northampton and fifth-placed Harlequins, with the final play-off berth still very much up for grabs.

The fight for European Champions Cup rugby was just as intense and every bit as complicated, as Bath, Sale Sharks, Wasps and Bristol Bears all remained in with a shout of sneaking sixth.

Ultimately, the battle for both positions went down to the very last play…

The scrap to reach the play-offs

There was still one play-off place to be decided going into the final afternoon and two contenders in the frame – Northampton and Harlequins.

Quins had resided in the top four for the majority of the season before a slump in form in the closing weeks had allowed Northampton to leapfrog them.

Saints held a one-point advantage as they travelled to leaders Exeter on a run of three consecutive wins. Quins, on the other hand, had won just once in their past six Premiership matches and were on a run of three defeats on the road.

Meanwhile, Paul Gustard’s side travelled to Wasps, themselves still with an outside chance of reaching the top six, knowing they would need to better Northampton’s result.

Saints looked to be causing an upset when they took an early lead at Exeter and were level at 21-21 going into half-time, but last season’s runners-up showed their class after the break and eventually ran in six tries to win 40-21.

That win guaranteed Exeter top spot, with holders Saracens going down 31-29 at Worcester.

Meanwhile, things weren’t going to plan for Harlequins for the most part as Wasps’ three tries gave them a 16-point lead early in the second half.

But Quins kept fighting with three of their own and, with four minutes to play, clawed it back to 27-25. And then came the drama…

Right on the halfway line, Harlequins were awarded a penalty with a minute to play and replacement fly-half James Lang chose to back himself to kick the three points to snatch the win and fourth place.

But Lang’s effort dropped narrowly under the crossbar and most of Northampton breathed a sigh of relief. Quins’ players were left stunned at full-time.

The battle to finish sixth

The play-off race wasn’t the only dramatic plot playing out on Saturday.

A final European Champions Cup place was up for grabs and, even heading into the second half, all four sides were in with a chance of claiming it.

Bath were the team in possession before the games kicked-off and they travelled to old rivals Leicester Tigers looking for a first successive Premiership win since December.

A point behind them in seventh were Sale Sharks, who hosted play-off-bound Gloucester and knew they needed Bath to trip up.

Should both those sides lose, Wasps and Bristol Bears – level on points in eighth and ninth respectively – could have gate crashed with wins in their fixtures against Harlequins and Newcastle Falcons.

As mentioned, Wasps did their bit and Bristol followed suit at relegated Newcastle, but only three tries for the Bears meant they missed out on the full five points they needed.

And so down it came effectively to a straight shootout between Sale and Bath.

Steve Diamond’s side eventually edged a topsy-turvy encounter against Gloucester 46-41 that featured a total of 13 tries.

With the Sharks match finishing just ahead of Bath’s at Welford Road, they had completed their requirements to bag sixth place. But cue yet more late drama…

Bath had at one stage trailed Leicester by 14 points in the first half, but restricted Tigers to just five more points in the second period.

With two minutes to play, the Blue, Black and Whites needed a fourth converted try and the win to come away with the crucial five points that would edge them ahead of Sale.

Step forward replacement prop Jacques van Rooyen, who touched down to leave Rhys Priestland with an opportunity to kick the match-winning conversion.

The Wales back duly obliged and then from the restart booted the ball into touch to signal full-time and book Bath’s Champions Cup place for next season.