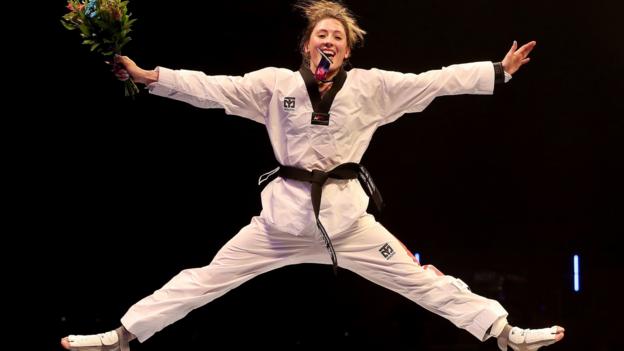 Jones, who claimed world silver in 2011, lost in the semi-finals to the South Korean at the last World Championships in 2017.

The Welsh fighter, 26, said in the build-up to the event that she was “desperate” to win the world title before she retires, but insists she has no plans to quit the sport just yet and is targeting a historic third Olympic gold at Tokyo 2020.

“I want to be a legend and no-one has ever won three Olympics in a row, so that’s the target,” she said.

“I know I’ll be able to retire happy one day, but this win makes me feel I’ve got so much more to give and achieve – it sounds great to be world champion.”

From GCSE study to the podium

Powell, who is the reigning world junior champion and competed for Team GB at last year’s Youth Olympics, produced three impressive wins to reach the semi-finals and secure bronze.

A tough 38-5 defeat by 2017 world silver medallist Tatiana Kudashova of Russia followed, but the young Briton was pleased with her first major senior honour.

“Obviously that isn’t how I wanted it to end, but it’s my first senior world championships and I’m really proud of what I’ve achieved,” she told BBC Sport.

“I’ve been doing my GCSEs at the same time as training, which hasn’t been easy, but I’ve been inspired by Jade Jones and Bianca Walkden and hopefully I can follow them in the next few years.”

European champion Lauren Williams suffered what was seen as a surprise 31-15 opening round defeat by Kimia Hemati of Iran.

However, the 19-year-old then revealed that she broke her leg during a competition in February and only returned to full-time training last month.

“I’m just devastated,” she told BBC Sport. “If could explain my worst nightmare than that was it; I just lived it.

“The build-up has been just about recovery and although I felt good in the warm-up, I just wasn’t ready.”

The 2017 world bronze medallist Damon Sansum performed well en route to the last 16, before falling behind in the closing stages and losing 13-12 to Roberto Botta of Italy.

“That’s not how I wanted it to go,” said the former kickboxing world champion. “I really thought I could go out and win, but it wasn’t to be and for sure this is my last World Championships in this sport.”

Another to reveal this year’s edition would be the last of their career was Aaron Cook.

The 2008 Team GB Olympian, who switched nationality and competed for Moldova at Rio 2016, also exited after a dramatic quarter-final clash with Azerbaijan’s Milad Beigi Harchegani.

“I gave everything,” said the tearful European champion. “I was desperate to do it [win] fighting for the last time in this country, but it wasn’t enough and I’m gutted.”

The women’s -49kg final was won by Panipak Wongpattanakit of Thailand, with Italian Simone Alessio taking the men’s -74kg title.

Among the British contenders hoping to challenge for medals of the final day of the championships on Sunday is 2017 world silver medallist Mahama Cho.