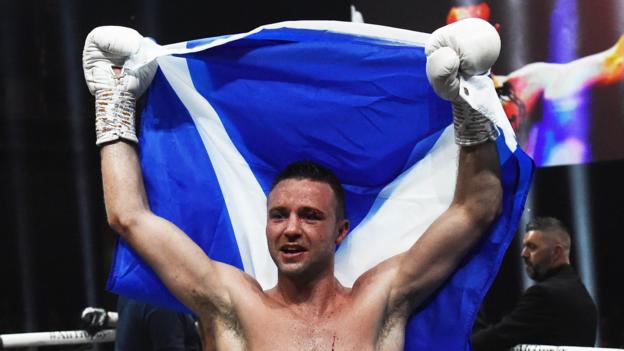 Josh Taylor claimed his first world title with a points victory against Ivan Baranchyk in the IBF super-lightweight title bout in Glasgow.

Scot Taylor, 28, knocked down the previously unbeaten Belarusian twice in the sixth round.

The contest doubled as the weight division’s World Boxing Super Series semi-final and Taylor will face American Regis Prograis in the final.

Taylor moves on to 15 wins from 15, which includes four successful defences of his WBC Silver super-lightweight title.

For the longest time Taylor had been imagining what it would be like to become world champion. For years he has been dreaming about it, writing about it, a thought in his head that would never leave him.

In his sleep he could hear the words, ‘Josh Taylor, the new super lightweight champion of the world’ but he doesn’t have to wonder about how those words might sound any more, for on Saturday night he heard them for real.

‘Easy peasy,” he said in the aftermath. It’s hard to know how well-versed Baranchyk is in the Scottish tongue but he probably didn’t have to understand the lingo when the body language of his opponent was so unambiguously joyous.

At 9.45pm, Taylor emerged into the arena to a cacophony, made his way to a ringside pedestal and stood there with an arm aloft, drinking in the acclaim of the home support. Ivan The Beast stood on a pedestal himself, staring into the dark but listening to the chanting and, later, the boos that came in waves.

All night, Taylor was serenaded with cries of ‘One Josh Taylor…’ All night he was roared on by his people, a man fulfilling his destiny against a tough opponent.

Boxing wisdom had it that Taylor wouldn’t take out Baranchyk early – he’s not the type of fighter who has a huge habit of icing his rivals with knockout blows – but that he would definitely beat him with an amalgam of speed and timing and work-rate and suffocating pressure.

And boxing wisdom was proven correct. In his last fight, against the highly-regarded Ryan Martin, the Scot put on one of his most complete performances, a clever strategy that ground Martin down, demoralising him bit by bit, schooling him in the art of tactical boxing. He outmanoeuvred Martin at every turn. At all points he looked like a king heading inexorably towards his throne.

That’s what unfolded again here against a backdrop of deafening noise and undiluted glory for the Prestonpans man. He said later that he probably took more shots than he wanted to take, that he’d fought a bit looser and took more risks than was probably sensible, but it was compelling for all that. Taylor thrilled his way to the title.

There was pressure on him. Huge pressure. He was a practically unbackable favourite, a virtual certainty in the eyes of the bookmakers. The crowd, meanwhile, had already crowned him. If that was a burden, he carried it lightly. “I will win this fight,” he had said. “I’m not complacent, but I will be world champion. I don’t just think that, I know that.”

The Belarusian came to Glasgow with the title and an unblemished record, a reputation for fearsome punching and a scrapping mentality. He kept that dog-rough demeanour to the end but he was just outclassed round by round.

A few weeks ago, Taylor was asked about Baranchyk’s style. “Oh, I won’t have to go looking for him,” he said. In the lexicon of boxing that meant that the visitor was going to be in his face and on his chest all night, given half the chance.

Baranchyk became the champ by winning ugly, by transforming the ring into a bear pit and bullying his rival. He had Taylor in a little bit of trouble at the end of the fifth when Taylor was cut around his left eye.

Just when the home crowd might have gulped hard for their man, he took control. He responded to a cut eye with a sensational sixth round, flooring Baranchyk with a short right hook and then bringing him crashing down again with a precise left-hand flurry. Only the bell saved the Belarusian.

Taylor walked to his corner, raising an arm aloft again to acknowledge the delirium of his fans. He came again in the seventh and had Baranchyk in trouble again, looking for a moment that he was going to need it there. Baranchyk, a stubborn beast and teak-tough operator, didn’t fall. His pride wouldn’t allow him.

He always carried a threat, right to the last bell. Taylor was on top, easing away on points, but while Baranchyk stood up he had hope. He became wild and flailed for that one blow that would have saved his title, but it never came. Taylor was too elusive, too good. He jabbed his way home and how Glasgow loved it.

At fight’s end, his trainer, Shane McGuigan, ran to the heart of the ring and lifted his man high. They knew. Even before the scorecards came in giving Taylor the fight by four rounds on two cards and eight rounds on a third, they knew. Even Baranchyk knew. He was gallant, but he knew.

Next for the champion, the mouth almighty himself: Regis Prograis, the WBA champion out of New Orleans, with 24 fights, 24 wins. Prograis was ringside at the Hydro. Later, he was introduced to the crowd and got the kind of Glasgow welcome that might make him a little reluctant to come back.

He’s a devastating machine, a fighter sufficiently ‘box office’ to belong to a management company part-owned by the Hollywood A-lister Mark Wahlberg. Taylor will face him later in the year, possibly in Vegas, possibly in Scotland. Money will dictate that.

Right now, Taylor doesn’t care. He doesn’t know where and when he’s going to meet Prograis again, but he knows where he is right now – in a boxing dreamland at the top of the world.

Rodriguez was knocked down three times before the fight was stopped as unbeaten Inoue became a double world champion by adding to his WBA bantamweight title.

Inoue will take on either Nonito Donaire or Zolani Tete in the Super Series bantamweight final.