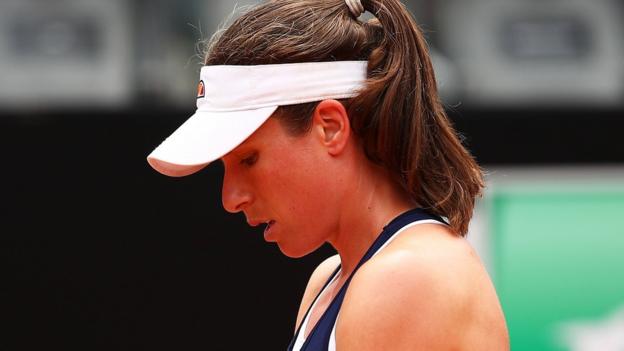 British number one Johanna Konta’s wait for a first WTA clay-court title continues after she lost to Karolina Pliskova in the Italian Open final.

Czech world number seven Pliskova won 6-3 6-4 in one hour 25 minutes in Rome for her second title of the season.

Konta, 28, beat two top-10 players to reach the final and earned a seeding at the French Open starting on 26 May.

“I’m super pleased with how I’ve been progressing this year and improving in every match,” said Konta.

“This is my second biggest final after Miami. This is a big moment for me. I’m very pleased to be making that progress.”

Konta was the first British woman to reach the Italian Open final since Virginia Wade in 1971, while Pliskova is the first Czech woman to win it since 1978.

Konta did not recover from being broken in her opening service game, and against at 3-3 in the second.

Pliskova required three match points to secure victory and claim her first title since the Brisbane International in January.

‘What a week for Konta’ – analysis

Pliskova was the sharper player and allowed Konta a look at just one break point.

The serve remains the foundation of Pliskova’s game, but she has developed into a very accomplished clay-court player, and will be the second seed at the French Open.

Konta could not reproduce the stunning form she found earlier in the tournament, but what a week – a season-changing week.

She will no longer be at the mercy of the draw come the French Open, and almost certainly Wimbledon too. As a seed, she cannot player anyone else in the world’s top 32 until at least the third round.

Konta’s tour results before April were unspectacular, but she now sits 13th in the annual rankings race. And she has also won six Fed Cup matches for her country, which aren’t taken into consideration.