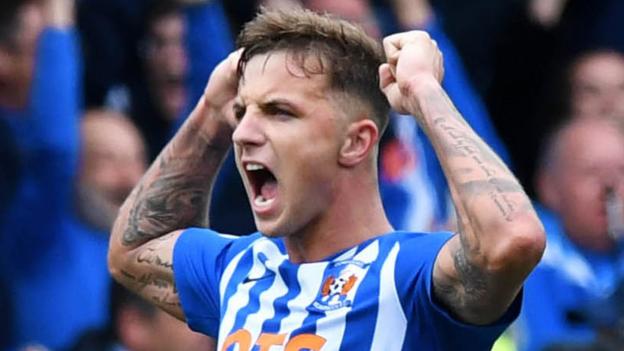 Steve Clarke’s Kilmarnock clinched third place in the Scottish Premiership – and a Europa League place – after a late winner against Rangers.

The home side shrugged off the potential loss of their manager, who is favourite to be named Scotland head coach, to edge out Aberdeen.

It means Clarke’s side stay ahead of Aberdeen, who won at Hibernian, on goal difference and secure a return to European football for the first time since 2001, their first third-place finish since 1966 and a record points total.

They also ended the visitors’ run of seven consecutive victories as Kilmarnock finished their season with a flourish thanks to three straight wins of their own.

If the Scottish FA does persuade Clarke to leave his beloved Kilmarnock, he will exit with the club, not just the side on the pitch, transformed in his 19 months in charge of the team he supported as a boy.

Kilmarnock had halved Rangers’ normal allocation of tickets, yet 12,248 – the best at Rugby Park this season – turned up in the hope of a crucial result and perhaps say goodbye to their hometown hero.

Yet Rangers, despite five changes as Steven Gerrard took the chance to rest some of his squad, started the game with the swagger you would expect from a side fresh from a derby victory over champions Celtic.

Morelos, back up front despite Jermain Defoe’s fine form, had already scored nine times in six meetings with Kilmarnock this season and was only to be denied by a fine block from Jamie MacDonald, with Daniel Candeias firing against the crossbar.

Resilience has been the watchword for Killie under Clarke and they survived that early pressure to take the lead when on-loan Celtic midfielder Youssouf Mulumbu pounced on Glen Kamara’s loss of possession and found Burke with a clever chip for the former Rangers winger to fire low past Wes Foderingham.

Rangers were almost back level straight from the restart as MacDonald, restored in place of on-loan Watford goalkeeper Daniel Bachmann, beat away a Ryan Kent shot then Morelos fired wastefully into the side netting.

Morelos was to play a crucial double role in his 30th goal of the season – his 18th in the Premiership edging out Aberdeen’s Sam Cosgrove as the best in the league this season.

Moments after Aberdeen had edged into the lead at Easter Road, the striker crashed into MacDonald and minutes later sent a drive flashing past the ailing goalkeeper who was soon to be replaced with debutant Devlin MacKay.

When Liam Millar had a goal disallowed for offside, it looked like it was not going to be Kilmarnock’s day – only for Stephen O’Donnell to go down after a tug on the shirt by Borna Barisic and for Brophy’s spot kick to evade the fingers of goalkeeper Andy Firth, who had replaced the injured Foderingham.

The scene was set for manager of the year Clarke, who had been sitting in the stand because of a SFA touchline ban, to come down to join in the justifiably wild celebrations, address the crowd but leave the question unanswered about whether it was a last triumphant bow as Kilmarnock manager.