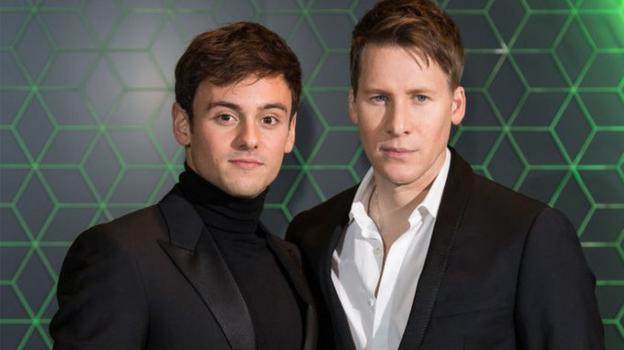 British Swimming says it is “extremely disappointed” after claims from Tom Daley’s husband, Dustin Lance Black, that the organisation has created a “toxic environment” for families at the Diving World Series.

Black, 44, later said the organisation was “corrupt” in a series of tweets.

It followed a dispute over child buggies, which are not allowed on the concourse at the London Aquatic Centre.

British Swimming says it offered to put measures in place for the family.

He was supported by some members of his family but husband Black and their son Robbie Ray were absent.

“We are so proud of him! And want more than anything to be there, but some rather cruel, thoughtless British Swimming organisers have created a situation that is neither safe nor welcoming for our family,” Black added.

“It’s time to start treating families how other nations do: as assets, not obstacles.”

Black, who had said he would “share the ugly details” on Monday, later tweeted: “So we agreed over the weekend to resolve our dispute with British Swimming in private. And within the hour the CEO of British Swimming put out a press release that is an absolute misrepresentation of what occurred. Or as my mom would call it: a lie. This organisation is corrupt.”

British Swimming told BBC Sport it had not put out a press release and that the dispute arose over health and safety reasons.

“The London Aquatic Centre’s policy is not to allow buggies on to the spectator concourse for health and safety reasons and British Swimming supported this policy to ensure the safety of everyone attending this exciting event.

“British Swimming recognises the fundamental part that families play in supporting all of the athletes and offered to put measures in place to store the buggy during the event so that Tom’s family could be present. We were pleased to see some of Tom’s family there last night celebrating his success.”