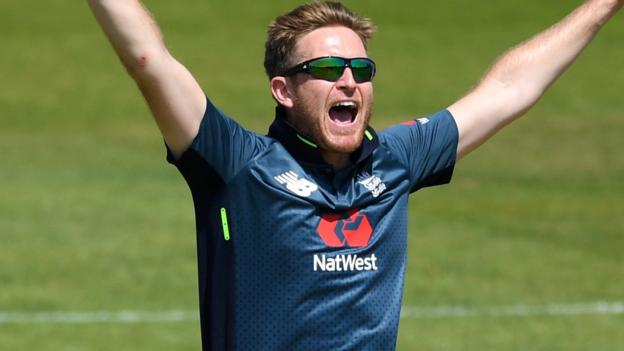 Spinner Liam Dawson is still in contention to be named in England’s World Cup squad despite not playing in the series against Pakistan, according to coach Trevor Bayliss.

The Australian says Dawson is vying with Joe Denly, a batsman who bowls some part-time leg-breaks.

England will name their squad at 09:30 BST on Tuesday.

“Dawson has been in conversations for the last six months and will get a good hearing at the meeting,” said Bayliss.

England must also decide on the make-up of their pace attack, with David Willey, Tom Curran and Liam Plunkett probably competing for two spots.

They would join Chris Woakes and Mark Wood, and Jofra Archer who qualified to play for England in March and has since played three one-day internationals.

All six were named in England’s provisional squad, along with Denly, who had limited options to press his claims in the 4-0 series win against Pakistan.

The 33-year-old bowled six wicketless overs and batted once, scoring 17.

England believe that his inclusion would give them greater flexibility, as he could double as batting cover and a bowling option.

However, there will be another reserve batsman – likely James Vince – in the squad.

So, it can be argued that Hampshire’s Dawson, a stronger bowler than Denly, would be a better like-for-like replacement should one of frontline pair Adil Rashid and Moeen Ali be unavailable.

“That’s the decision we have to mull over,” said Bayliss.

“Denly covers a few positions. His batting is obviously his strength and he covers a second batting spot.

“He’s done well in the limited opportunities he’s had for us over the last few months. And obviously a few leg-spinners as well.

“With Dawson, he’s not a bad batter either, but he’s been selected in previous squads as a third spinner. You would have to say he’s the next best spinner.”