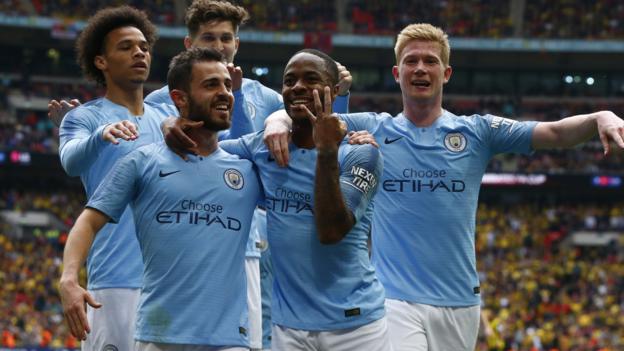 There are many things that make Manchester City the best Premier League side I’ve ever seen, but what impresses me most is their hunger and desire.

They always want more – more goals, and more trophies. And the way they go about getting them is what makes them different from the other great English sides of the modern era.

I played against Manchester United’s treble winners of 1998-99 and Arsenal’s Invincibles of 2003-04, so I know how good they were – but City are doing something new, that we have not seen here before.

The United side that won the treble in 1999 were a brilliant attacking team that would destroy you with pace when they flew forward.

In Arsene Wenger’s early years with the Gunners, they were groundbreaking in their own way, playing possession football but also able to pass their way through you in the blink of an eye.

Both of those sides were horrible to play against, but the way City make life so difficult for the opposition takes things to a different level.

We know how good Pep Guardiola’s side are on the ball, but what makes City really special is how they relentlessly go after people and get it back.

Watching them against Watford in Saturday’s FA Cup final was a great example of that. They were 3-0 up but they kept hunting the ball down, then punishing the Hornets again and again.

We got used to seeing that from Guardiola’s great Barcelona side, but now he has brought that approach – or a variation of it – to the Premier League.

Pep found it tough in his first season and did not win anything, but since then he has won five out of six domestic trophies, and in style too.

This year and last year, the standards City have set are the best we have seen since the Premier League started in 1992.

I would not say they are the best team I have seen in my lifetime because I grew up in the time of the great Liverpool sides of the 1970s and 1980s.

City have not dominated Europe yet, in the way the Reds did during those decades, but in terms of the Premier League era then yes, they are already exceptional.

The statistics show that too. They hit 169 goals in 61 games on their way to winning a unique treble in 2018-19, breaking their own record for the most in a single campaign, and have earned an incredible 198 points over the past two seasons.

You cannot tell me that they have not had any competition in that time, either. You can see the strength of the Premier League from the fact that four of our clubs – not including City – are in the Champions League and Europa League finals.

We have just had the greatest title race that I can remember, with Liverpool taking it to the final day, and by doing that I think they have helped push City to another level too.

Kompany exit not the end of Man City’s success

It is hard to see anyone stopping City’s domestic dominance any time soon because only Jurgen Klopp’s side are anywhere near them at the moment.

Spurs have got a big gap to close, as do Chelsea – who might not be able to sign anyone this summer. Arsenal are a long way off and Manchester United are a million miles away.

The bad news for the chasing pack is that I can actually see City improving again next year, and they will be even better next time.

They will sign some players over the summer – three or four at a guess – to freshen up their squad in the way all successful clubs do.

That might include a left-back, a sitting midfielder as a successor to Fernandinho and a centre-forward. They only have Aguero and Gabriel Jesus to play up front so could do with more cover there.

The same applies at centre-half, now that Vincent Kompany has announced he is leaving to be player-manager of Anderlecht.

Of course they will miss Kompany, because he has played a huge part in the club’s rise over the past 10 years and epitomises everything about what makes them so good at the moment.

But it is not the case that they will not be able to cope without him. His departure is the end of an era but it does not signal the end of their success.

You only had to look at City’s bench at Wembley on Saturday to see how strong they are.

Their substitutes’ combined cost came to just under £250m and they were able to bring on players as good as Kevin de Bruyne, Leroy Sane and John Stones in the second half.

Guardiola did not even have to use his top scorer Sergio Aguero, who has got 31 goals this season, but his side still won 6-0.

Plenty of clubs have spent big money, but City have spent extremely wisely and that enabled them to chase glory on four fronts for most of the season, and eventually triumph on three of them.

That meant playing twice a week for almost nine months, until Tottenham knocked them out of the Champions League in mid-April on a night of incredible drama.

Having the biggest and the best squad helped them cope with that schedule, but they also needed an outstanding mentality to keep going the way they have.

That stems from their manager. It was fascinating to see Guardiola jabbering away to Raheem Sterling on Saturday, straight after his side had just sealed a domestic treble.

That is the kind of drive Pep has, and he has passed it on to his team. He will not rest, and neither will they.

The Champions League will be his next target because, at the moment, the one criticism people can throw at him is that he has not won it without Lionel Messi.

Yes, he won it as Barca boss in 2009 and 2011, but it eluded him during his time at Bayern Munich and, so far, at City too. You just know he will be making it his mission to put that right.