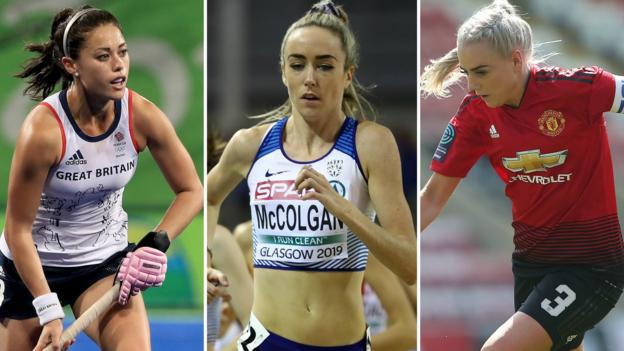 What can turn wine into vinegar, kill bees, cause bacon to become rancid, and even dull a steel sword?

The answer, according to various theories through history, is a woman’s period.

While some still find the subject embarrassing, there is a growing understanding of the effects periods have on female athletes, professional or otherwise.

Some sportswomen have their periods monitored by their sport’s governing body. Some try to schedule them as best they can. And some learn to deal with cramps that can be so bad, they are left rolling on the floor in pain.

How do periods affect athletes?

McColgan struggled with period pains as a teenager, experiencing bad cramps and flushing hot and cold before vomiting to a point where “it would wipe out maybe four hours of my day, just from the pain”.

More recently, the 28-year-old had an unusual hamstring injury caused by a “perfect storm” of factors, including her period.

“I had to pull out of a race in Rome last year – I’d taken my period and I felt flat, heavy, tired,” the Scot told BBC Sport.

“I got home and I was frustrated to have dropped out of a race for the first time. I went on the treadmill and did a really hard session.

“It didn’t help that I’d been sitting around all day travelling, and then taken my period, but two days later I pulled my hamstring. There’s no doubt in my mind it was all connected.

“They scanned it and the radiologist said he’d never really seen that much inflammation in one muscle before.”

The majority of research on how female athletes should train is based on what has worked for men – but that comes with obvious problems.

“Women have a monthly cycle of hormones, which have powerful effects on our bodily system, emotions and mood,” said Dr Emma Ross, co-head of physiology at the English Institute of Sport (EIS).

“This difference alone has the potential to mean women will adapt to training differently at different points of their cycle.”

Research has suggested that anterior cruciate ligament (ACL) injuries – the most serious kind of knee damage – are more prevalent in female athletes than men, and they may be more prone to injury and illness at certain times.

Oestrogen, the hormone that repairs and thickens the uterus lining during menstruation, can increase the elasticity of joints in the days before ovulation. This can lead to ACL problems, which occur if a knee or lower leg is twisted. It can also lead to bone injuries, as oestrogen helps develop strong, dense bones.

The EIS has launched the SmartHer campaign, which prioritises female health, dealing with topics from periods to urinary incontinence, and supports athletes during their careers.

Dr Ross believes women “often normalise a lot of these things, and just put up with them”.

“The elite sporting environment is dominated by males in roles such as coach and performance director,” she said.

“It can create an environment that often lacks an intuition about how female-specific factors may affect athletes.”

According to Dr Ross, more than 70% of women have not received education about their menstrual cycle and exercise – something McColgan thinks could be hindering people from talking about it.

“It’s crazy that, in 2019, we don’t really have an answer as to how we can continue being healthy and performing at a good level,” she said.

“I think a lot of people might be shocked that athletes even have periods.”

Why do we monitor periods?

For Quek, who was part of the British hockey team that won Olympic gold in 2016, filling in information about her menstrual cycle was part of her morning routine.

The 30-year-old – and her Great Britain and England team-mates – used an app on her phone to fill in a monitoring form. It would record her heart rate, the colour of her urine, how long she had slept for, and if she had any muscle soreness.

And there was a box to tick if that day was the first day of her menstrual cycle.

Former GB captain Richardson-Walsh, 39, said: “It started in the lead-up to London 2012 – our strength and conditioning coach, Dave Hamilton, found there was a pattern with soft-tissue injuries.

“We would send a text on day one of our cycle, so he could mark it on our training calendar. He tried to monitor, as much as you can with a squad of 28 women, our training loads depending on our menstrual cycle.”

The monitoring was optional. It was, as Richardson-Walsh says, a case of players being curious about the changes in their body, and an awareness of how mood, diet and nutrition could change as they menstruate.

Quek says the group were open with each other – when they were on their periods, players would “put an arm around someone and say you’ve got the red sash” – and the data collected was designed to give the staff a better understanding of their players’ bodies, rather than being used as an excuse not to select them for a match.

“In the gym, in conversation with staff, you might lift slightly lighter weights during your cycle,” Richardson-Walsh adds.

“Dave found ligament and tendon tissues were less strong during your cycle, so you could do less turning, or fewer repetitions of turning, to avoid twisting an ankle or a knee.”

“Our doctors at United and England are all female, so they all understand and they know how it feels,” says Greenwood, 25.

“It’s the human body, it’s how it works. And if you’re unable to train, then so be it.”

How do athletes compete on their period?

For McColgan, it is all about preparation.

“The big one really is painkillers, so if I know I’m coming on to my period in a day’s time, I can get the stomach cramps calmed down,” she said.

“If I wait until the day, I’ll be rolling about on the floor it is that sore.

McColgan tried a contraceptive pill, which can make periods lighter and ease symptoms such as cramp, but believes it was too strong for what she describes as “my low hormones”.

Her emotions fluctuated: she says she “cried for six weeks” and her period symptoms would last far longer than the usual seven days.

A disappointing European Indoors, where McColgan finished seventh in the 3,000m final after starting her period on the morning of the race, led her to seek advice from other athletes.

“I was OK until the past couple of years but, at this level, you’re competing at Olympic Games and I need to get something to try and calm things down,” she said.

“Some athletes gave me a few different options – such as looking at the coil, and pills that maybe have a lower level of hormones.

“I saw a gynaecologist through British Athletics and he spoke about trying different pills but the fact I am menstruating means I’m healthy, and he was worried about putting me on the pill in case it played havoc with something else.”

It has been suggested that taking the pill could lower a woman’s risk of tearing her ACL.

But tablets aren’t guaranteed to control period pains – or not affect an athlete’s performance.

Britain’s Jess Judd was left in tears after failing to qualify for the 800m semi-finals at 2013 World Athletics Championships. Judd had been due to start her period and had been given norethisterone to delay it, which she believed “played with my hormones more”.

Richardson-Walsh struggled with cramping and heavy periods as a teenager, and again since retiring in 2016. Greenwood can feel heavy-legged; Quek would wear her ‘period pants’ whenever she began her cycle.

McColgan is working with her body as best as she can.

But, as she wrote on Instagram, sometimes she will be “like a walrus trying to run around in circles” in front of a crowd of thousands.