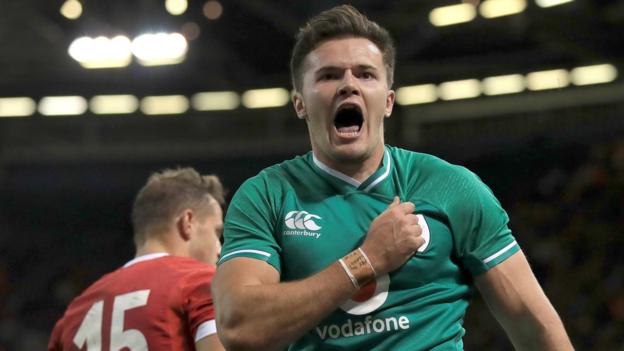 Two Jacob Stockdale tries helped Ireland knock Wales off the top of the world rankings with victory in Cardiff.

Ireland built a 22-3 lead with a brace from winger Stockdale and a penalty try, before Wales staged a second-half revival through tries from Owen Lane and Rhys Patchell.

Defeat was not an ideal way to mark Warren Gatland’s last home game in charge of Wales.

Wales will name their 31-man World Cup squad on Sunday.

Ireland coach Joe Schmidt is expected to submit a provisional 31-man squad on Monday, before confirming it after the final warm-up game against Wales in Dublin next weekend.

Wales will drop to fourth and Ireland rise to second when the official World Rugby rankings are released on Monday, with New Zealand again topping the charts.

Not many Welsh players pushed their cases in their final audition before the World Cup party is selected on Saturday evening and announced on Sunday afternoon, with nine disappointed players to be dropped from the current 40-man squad.

Wing Lane was perhaps an exception with a try-scoring display on his first cap, while Hallam Amos was also prominent in the battle for a back-three place.

Replacement fly-half Patchell was also more impressive than rival Jarrod Evans in the bid to be the second fly-half in Japan behind Dan Biggar.

For an hour there was little attacking cohesion for the hosts, the normally resolute defence faltering at the Principality Stadium as Wales suffered a home loss for the first time in 12 games and almost two years.

The summer scrum concerns continued as Wales were again dominated in this set-piece facet, with Ireland awarded a second-half penalty try.

In contrast, Ireland will be encouraged with the first hour after putting their Twickenham horror show behind them, when England inflicted a record 57-15 win over Schmidt’s men.

Wales initially looked exactly what they were: a shadow side who had not played together before with 14 changes from the team that defeated England.

Only flanker James Davies survived, while there were two new caps in Lane and prop Rhys Carre, while Cardiff Blues back-rower Josh Navidi captained the side for the first time from number eight.

There was a late change on the replacements bench with Aaron Wainwright replacing fellow Dragons back-rower Ross Moriarty who aggravated a hip.

Ireland themselves made 11 alterations including the inclusion of full-back Will Addison, while hooker Niall Scannell and flanker Tadhg Beirne were also included.

The visitors looked more cohesive and powerful, with British and Irish Lions duo Peter O’Mahony and Iain Henderson, plus James Ryan in their pack.

Gatland had made pre-match comments stating Wales could derail Schmidt’s side and put them under pressure ahead of the World Cup.

There was no evidence of that when official man-of-the-match Jack Carty opened the scoring with a penalty, before Wales responded through Evans after some prominent work from Lane.

Gatland had stated previously it was a straight shootout at fly-half between Jarrod Evans and Patchell to go to Japan alongside Biggar.

Evans would have rued missing a simple penalty kick before Stockdale took advantage of a loose Aaron Shingler pass, with the Irish wing kicking ahead and sprinting away for his second try.

Evans also missed a simple kick to touch as Ireland led 15-3 at the interval.

Gatland kept his word and Evans was replaced at half-time by Patchell, while Stockdale also did not reappear for the second half.

Wales started brightly with a flowing move down the right touchline but that was a brief foray as Ireland turned the screw.

The visitors were able to bring on Rory Best, Tadhg Furlong, Devin Toner and Garry Ringrose from their bench.

A Conway try was disallowed for a forward pass before the almost inevitable penalty try was awarded with the scrum under constant pressure.

Wales finally gained an attacking foothold and after concerted pressure, Lane was released in the right corner and produced a smart finish. Patchell converted from the touchline.

Replacement hooker Elliot Dee spurned the chance of a second try when he knocked the ball on with the line at his mercy.

Ringrose had a try disallowed after Bundee Aki tackled James Davies in the air, before Patchell went over to set up an exciting finale which Ireland survived.

World Rugby vice-chairman Agustin Pichot has this week branded the rankings system as ridiculous and vowed to change them.

Wales had risen to number one for the first time thanks to their win over England in Cardiff two weeks ago.

Gatland joked he was happy to relinquish the number one ranking and now Wales have. In contrast, Ireland are now second and have gone above England, who inflicted a record defeat against them a week ago.

Wales face Ireland in Dublin next Saturday in the double-header return for both sides’s final World Cup warm-up matches, with stronger sides expected to be selected by Schmidt and Gatland.