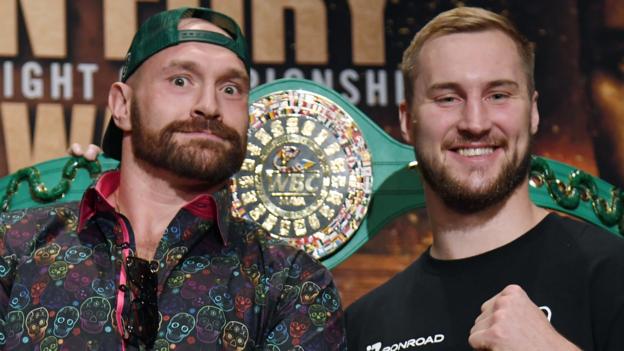 Tyson Fury vowed not to underestimate heavy underdog Otto Wallin at a colourful Las Vegas news conference where the British heavyweight claimed he could understand Spanish.

“I don’t underestimate anybody, I will respect everyone,” said Fury.

“I will train for a man like he has 20 knockouts in a row. The tall southpaw is always a challenge but I have never met a challenge I couldn’t defeat or a mountain I couldn’t climb – he will be no exception.

“Hopefully we go for a beer afterwards.”

Fury has tried to align himself with Mexican fans, who have travelled to Las Vegas for the weekend. He has repeatedly referred to himself as “El Rey Gitano”, which means “The Gypsy King”.

At at one point in the news conference, was challenged by a reporter to understand a question asked in Spanish.

After at first offering a stock answer, Fury concluded: “And yes, I do love cuddly toys and crayons, thank you for asking.”

His answer drew widespread laughter at the MGM Grand’s Studio Ballroom and Fury then told the next reporter poised to ask a question that he could only understand if it was asked in Spanish.

“I wasn’t supposed to box on this weekend,” Fury added.

“When we heard Saul ‘Canelo’ Alvarez would not be fighting in Las Vegas on this weekend I thought what a shock. This has been a special weekend for many years. I thought the Mexican people will not have a main event so I brought my fight date forward four weeks.”

One punch can change it all

With Fury’s entourage, including his brother Tommy and Love Island star Molly Mae, enjoying his humorous display, his UK promoter Frank Warren sought to focus minds by stating how much was at stake against Wallin given a rematch with WBC world heavyweight champion Deontay Wilder is set for early in 2020.

“One punch can change the whole thing,” stressed Warren.

Fury added: “Is Wallin knocking me out? Definitely not. I don’t know much about Otto and sometimes that is a good thing.

“Sometimes when you know a lot about an opponent it doesn’t turn me on fully, when it’s unknown it’s more exciting.

“I feel good, fit, have trained really hard, weight is perfect, injury free, sharp, rejuvenated. I feel ready for a good fight. I am as strong as I have ever been.”

Fury will next come face-to-face with Wallin at Friday’s weigh-in, before a T-Mobile Arena bout where he will seek to extend his record of 28 wins and one draw.

US promoter Bob Arum pointed to the inspiration Wallin can draw from the shock caused by Swedish heavyweight Ingemar Johansson in arriving in American to stun the legendary Floyd Paterson in 1959.

Wallin replied: “I come from a small place in Sweden and now I’m on the big stage. I’ve dreamed of this and am willing to put it all on the line.

“I’m well schooled, I have good offence, defence and I think I have what it takes to cause an upset.”

Saturday’s bout is expected to start at around 05:00 BST on Sunday in the UK and will be broadcast on BBC Radio 5 Live with full live text commentary on the BBC Sport website.